I woke up later than expected today – having slept in on a Sunday for the first time in months. Normally I’m awake by about 7 or 8 at the latest but it was 9.30!

Last night however I had the kind of uninterrupted sleep that’s usually reserved for the recently deceased. As well as walking around Leamington yesterday I also had an evening trip to the park and rattled off a couple of laps before bedtime, which probably accounted for the sudden case of dead head.

So – I woke up feeling refreshed, but already in a rush to meet someone for a walk around the park at 10am.

Time for a double quick shower!!!

My ‘unicorn friend’ from a previous post had lodged an idea in my head yesterday. She’d read my blog and commented on my 19 mile walking total, pointing out to me that I’d probably walked the length of the English Channel.

Surely not! I thought. It’s got to be longer than that! So I Googled it.

According to the channel swimming association the shortest distance coast to coast is actually 21 miles – two miles more than I’d done.

Wow! I LOVE having tangible real world examples of progress like this, and like yesterday’s fire extinguisher analogy for my total weight lost it’s a fantastic example of how far I’ve come from not being able to easily reach the end of my road.

This morning though such limitations were a distant memory and I was walking with another lovely chatty lady from the Slimming World group.

We had a great time in the park which was only enhanced by an unexpected sighting of the swanling and a couple of pit stops to say hi to regular walkers.

It always perks me up seeing the (now not so) little swanling and it’s parents – who expectantly head to the bank for food when I approach, not realising all that awaits is a photo opportunity! 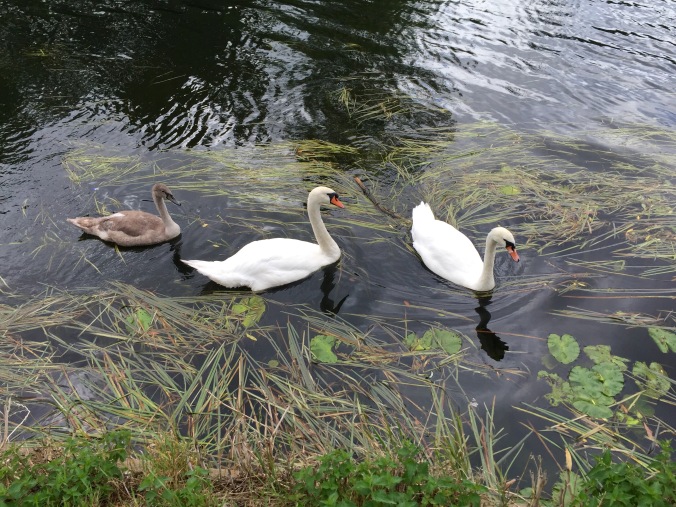 My walking partner said that there were other swans along the canal – and as it happened (much to my surprise) when we also walked around the fishing pond on the opposite side of the park (previously unexplored territory) there was another lone swan there as well.

My companion today is also the lady that inspired me to try an extra lap not so long ago – so it seems quite apt that we ended up exploring a new bit of the park together.

The circular mile route was busy today and as usual the power walking pink Lycra ladies were passing us in the opposite direction with their foam dumbbells and enthusiastically saying hello.

Enthusiasm wasn’t apparent in all quarters however and we briefly stopped to talk to a lady being trailed by a bored looking pug. He was looking behind more than in front and according the the lady with him it was because her husband (the dog’s true ‘owner’) was away.

He was used to being walked by a man she said and missed him. The pooch was clearly down in the dumps and it was about as glum looking as it’s possible for a dog to be.

With each successive lap the maudlin hound seemed further behind – either disliking the company or the park.

The last time we saw it’s disinterested waddling gait was as my companion and I sat for a rest in a sheltered hut by the miniature golf course.

It was at this time I noticed she was using a Fitbit app on her phone. When I questioned her about it she told me it was connected to a Fitbit pedometer clipped to her clothes. She used this all the time to track the distance she’d moved.

Typically I’ve ignored my Apple Watch stats and used my walkmeter app to track my progress. However I have to start and stop that whereas Apple Watch is constantly on the lookout for me doing stuff (as well as nagging the hell out of me) and keeping a tally of it.

We had such a lovely walk and chat that before long I’d completely lost track of exactly how far I’d gone. We rested periodically and continued to talk before moving on, but I wasn’t really counting anything.

Before I knew it we’d been there for over 2 hours and as we came to the end of our walk and were ready to go our separate ways she informed me we’d done four laps.

Wait? What? Surely not!

My fellow SW’er looks very much like the trustworthy sort – but just to prove it she showed me her Fitbit app. Sure enough we weren’t far off 9km! I looked at my Apple Watch app. 8.88km!

I was stunned. Was walking getting so easy that I could do a lap ACCIDENTALLY?

Shortly after I sat in Starbucks considering this. What had I done yesterday? I’d walked around town for quite a while without measuring it and also the park. I checked the log on my phone.

Yesterday I did the same amount as today without realising it! I was enjoying it so much it just happened. I’m crap with metric and imperial conversions so I checked Google again.

It seems I may have been walking further than I thought previously – so I’m going to start using the pedometer on my watch a lot more to track what I’m doing.

Whatever happens I think I might need a new goal. The distance of swimming the channel is clearly for wimps! I was half way there already!

Once more I returned to Google. What about the Channel Tunnel? That wasn’t dug to be the shortest distance from A to B. It’s longer. But how long?

I don’t want to set myself unreasonable goals – but this seems bizarrely do-able if Apple Watch and my walkmate’s Fitbit are telling the truth.

Since they’re independently corroborating the results with two different types of tech I’m inclined to believe them.

So – it’s now midday on Sunday. I’ve yet to meet my mate this afternoon for as yet undecided activities and I’ve already nailed 2/5ths of my new ambitious week’s  Eurotunnel goal.

I’m on the case Internet. I can SO do this!

See you in virtual France!