I know this not because my extremities are feeling it (although they are), not because there is frost everywhere (there is), not because I am putting an extra duvet on the bed (I am) but because MY FATHER HAS TOLD ME HE PLANS TO TURN THE HEATING ON.

I probably shouldn’t tease. Those who know me well enough will have been in my house wearing winter jumpers in my living room and marvelling at the beautiful patterns their frozen breath makes as it hangs in front of them thanks to the sub zero temperatures they’re subjected to.

At this moment in time I’m sitting typing this in a fleecy Star Wars floor length Jedi bath robe with a hood – over the top of my other clothes. The luxury of central heating is usually reserved for when guests visit – otherwise it’s wasting money.

My father however is of even hardier stock than myself – and comes from a generation where you needed a hammer to break the ice on an outdoor toilet if you were intrepid enough to attempt a number one or a number two during winter.

I was thinking of him wearing his customary coat and hat indoors when I pulled up for my morning walk in Coventry Memorial Park with a friend. 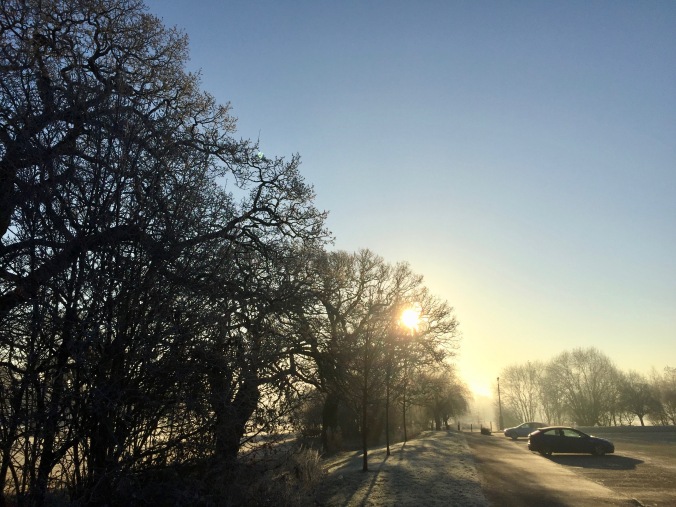 Everything had a frosty coating, and although the path was a bit treacherous the whole place seemed to be alive with children, dogs and those enjoying the sunshine and the sudden change in the tone of the scenery. 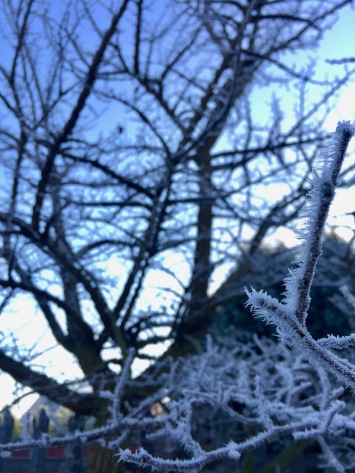 My friend said to me some time ago that one of the great pleasures of getting in touch with the world again after a long period off work was seeing the change of seasons. During this time he’d connected once more with the reality of nature – something that he’d forgotten when he was preoccupied with the drudgery of everyday life.

It’s so true. I can’t describe the subtlety or depth of the pleasure I’ve experienced over the last few months watching the parks and woods I’ve regularly walked in change as the time has crept by.

Sometimes it takes my breath away – and I’m amazed (and more than a little sad) that for a time I forgot how good being out in this makes me feel.

I was thinking all these thoughts and more as my friend and I strolled with his dog through the trees, round the bushes and across the crunchy grass to avoid the icy paths. We had been talking about life, Christmas and family almost non-stop since we’d exited our cars.

Then our train of thought was suddenly de-railed by a lady who approached us holding her arm and pointing at four people walking away in the opposite direction with dogs. She appeared to be in her late fifties or early sixties, of Indian or Pakistani descent, was wearing a headscarf and a long warm overcoat and very flustered. She was struggling to talk to us and make herself understood.

It’s not the first time I’ve seen this lady.

She’s in the park when I visit a lot – and in the summer she walks with flip flop sandals in the opposite direction to me at a speed I couldn’t manage to maintain in trainers. She never usually says hello or nods – but seems instead intently focused on her exercise.

Maybe it was because she’d seen us regularly in the past that she chose to approach us both today and try to explain what had happened to her.

‘I think I hurt – maybe broken. They go.’ She said, pointing and looking at the dog walkers.

Although language was a barrier after a few moments she got the point across that she thought that her arm might be badly hurt. I looked down at her right side and she was holding it limply by her waist. Her coat, glove and sleeve had a dusting of frost on that side, suggesting she’d recently been on the floor.

‘They ignore and don’t say who the dog belong to.’ She said.

‘Did the dog trip you up? Are you OK?’ I asked, placing my hand on her other arm to reassure her.

‘Yes! They go and not say who dog is!’ She said without looking directly at me and gesturing at four people with their backs to us.

‘Is your arm ok?’ My friend said ‘Do you need us to call an ambulance?’

‘No.’ – she said, still holding her arm and looking shaken. ‘They ignore me.’

She was still looking at the people walking away. She didn’t appear angry, and instead just seemed hurt and flustered. After asking if she needed us to do anything it seemed that she wanted no further help and instead just wanted to leave.

We’d passed a policeman moments before, and pointed in his direction – suggesting that she report the matter to him. I put my hand on her shoulder and asked if she was ok again.

She took off after nodding to look for the constable walking around the park, leaving my friend and I staring at the backs of her and the people walking away, not really knowing what to do.

We’d neither seen the incident or gotten a completely clear picture of what happened – although it seemed that a dog may have tripped her up and she’d hurt her arm before being ignored by the dog owners.

At this point my friend and I (unsure quite what to think) started discussing what had possibly taken place. We both came at it from a different angle – and had formed different narratives in our mind about what may or may not have transpired before we rounded the corner.

The four people walking away looked like white middle aged male and female dog walkers. They had a golden Labrador and a couple of terriers.

I wondered immediately about whether this problem had a racial element. Had they walked away from her because of her race or religion? Maybe this was the increasing xenophobia in the UK we hear so much about in the news?

My friend saw something different. He wasn’t looking at the colour or race of those involved. He just saw ignorant people who would probably have treated his (white) mum the same way.

I saw racial bias, and he instead just saw plain ignorance.

Honestly I don’t think we’ll ever know what really happened – but I do know that because I knew nothing about the situation my mind made judgements based on my own fears and worries.

I’ve always rather enjoyed visiting this park partially because of it’s diversity. It’s usually full of people from all kinds of backgrounds.

I think maybe I like it all the more because of the spectre of racism that seems to be hanging over our country following the UK’s ‘Brexit’ vote seems so distant there.

While the referendum was never about race or religion (at least not in my mind anyway) some elements have used it as an excuse to highlight and exacerbate such tensions and fault lines. I worry a lot that as a country we will slip back to the late 70’s and early 80’s (when I grew up) and into the attitudes that made casual racism so prevalent (and ugly) at the time.

Either way – I hope she’s ok. I didn’t see her again after she walked away and she didn’t seem to want us to help her or be with her when she was upset. She just wanted to tell someone – anyone – that some kind of injustice had happened and that she was shocked and hurt.

After that she was gone.

So – I’m unsure quite what to think now. I don’t really know how I feel about carrying my own preconceptions into this situation – or whether I was right or wrong to do so. I like to think I’m open minded – but maybe I have more bias than I’m willing to admit. Is it even possible to have an open mind? Surely every thought that we have is informed by ones that we’ve had before and those too are the sum of our experiences to date.

How do we get to a truly unbiased and prejudice free way of thinking about and viewing others?

Honestly I don’t know internet – but regardless of what caused the situation that my friend and I blundered into today I hope that stopping and talking to her for a few minutes helped.

If you need me I’ll be busy trying to think without bias and be as colour blind as humanly possible.

5 thoughts on “Bringing my own preconceptions”