At least in my neck of the woods the weather has been fairly awful this week. It’s been oddly humid as well as occasionally cold – and it’s not been pleasant when it comes to activity.

Yesterday I had the appetite of several cart horses that hadn’t eaten for a week and it was frankly all I could do to stop thinking about eating.

Every time I looked out of the window it was miserable – and I decided that there was no way that I was going out to get a second soaking in as many days.

I almost changed my mind later in the afternoon after a chat with a friend until I realised that my walking boots were still squelchy and damp from the day before. I decided therefore to move them closer to a radiator and make do with my exercise bike.

For whatever reason though I couldn’t make it to the end of my usual hill climb programme. My legs just didn’t have it in them and I retired after 25 minutes to sit quietly panting and annoyed with myself.

Consequently everything I ate yesterday came with an accompanying sense of guilt, which if I’m honest is still lingering a bit today.

Guilt is not necessarily a bad thing though – because whatever yesterday’s exploration of the deeper recesses of the fridge means for Saturday’s weigh in I wasn’t staying indoors today regardless of the weather.

Not having waterproof trousers though makes a walk along the river into town a tough sell. As I now sit (steaming slowly dry whilst drinking coffee) I have very soggy thighs and because of this today I’ve been looking abstractly at getting some.

If my purchase of supercoat has taught me anything though it’s that outdoor clothing is one of those areas where you really do get what you pay for.

Supercoat wasn’t cheap by any means – but given that it has a detachable fleece inside and waterproof overcoat that could be worn separately or combined with its lining means that I think in retrospect that the expense was mostly rooted in it’s dual use.

It’s certainly waterproof but (whatever it’s claims at the time of purchase) it’s not breathable.

If I’m honest it’s my own fault. I bought it for only two rather superficial reasons without thinking too far ahead.

I’m sure you’ll agree that neither of these are very considered approaches to spending money on an item – but you live and learn.

The fact is that a lot of my walks are occasions where I’m chasing an optimal exercise heart rate (around 90bpm usually) and when I hit this I tend to get a bit sweaty.

Both the fleece and the overcoat contain this perspiration when fully zipped up on rainy days – resulting in me getting slowly steamed until my clothes underneath look like I’ve been standing in a shower anyway.

I think this is just something that for the time being I’m going to have to live with though.

When I bought supercoat I felt it looked quite flattering – but I also tried on a fleece in the same 3XL size (on the 9th February). Whilst putting together this post I was looking at the photos I took at the time – and comparing them to the ones I took in the Sainsburys hoodie I tried on last Sunday (14th May). 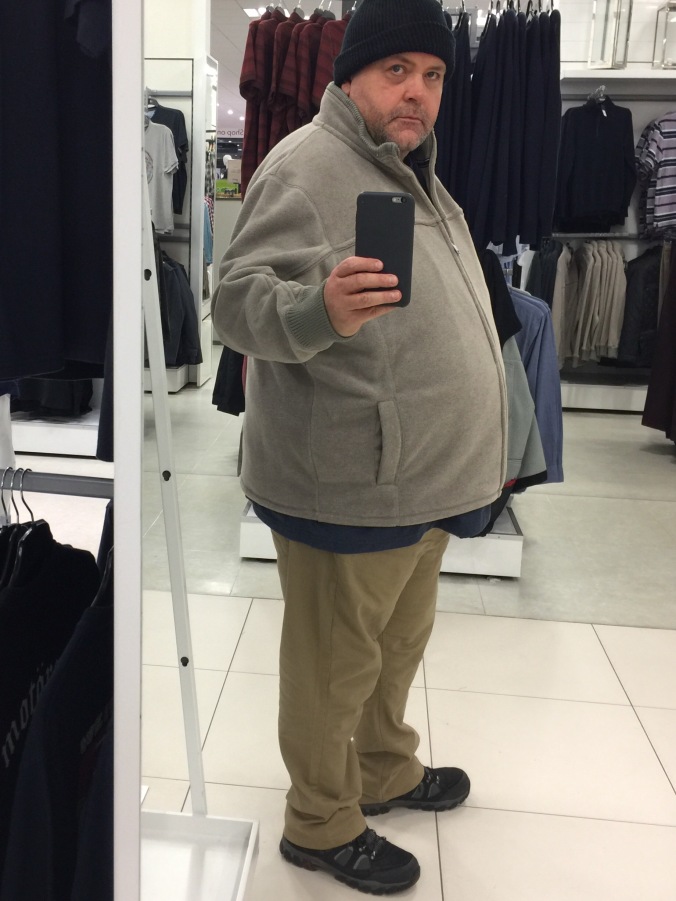 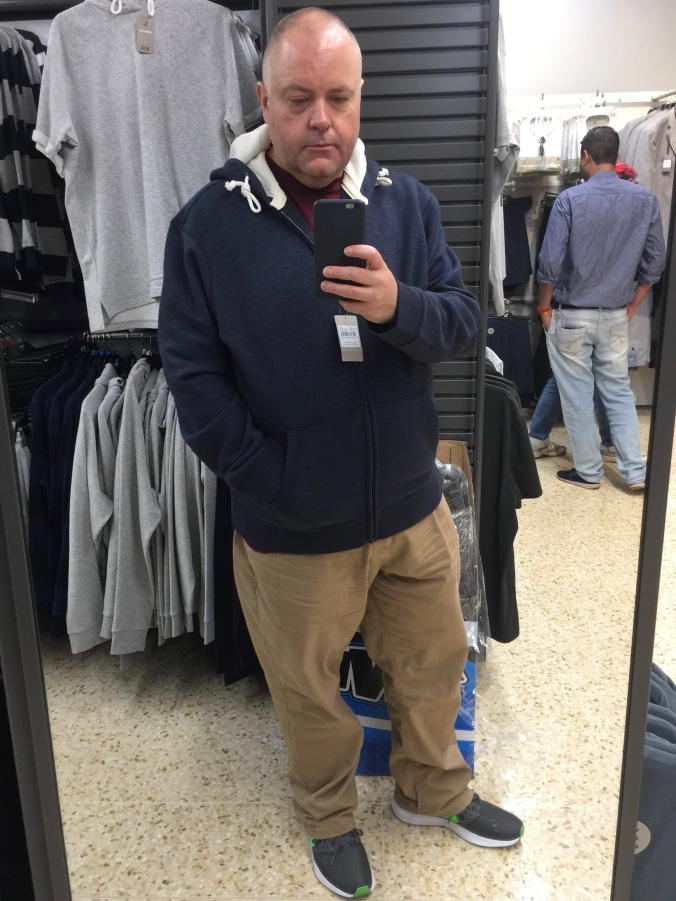 There are three months between these photos. In the top one I was 23st 10lbs and in the bottom one I’m 20st 9.5lbs – almost exactly three stone lighter.

I think that the mirror (and angle) is definitely flattering in the Sainsburys pic – but I know that in the February image I’m wearing a 4XL tee shirt (as opposed to 3XL below) and jeans with a 4inch larger waist (although these were getting quite loose at the time).

Therefore spending £12.50 on a pair of supermarket jeans that will only last a few months but will be worn almost daily seems reasonable – but buying a properly breathable walking jacket and waterproof trousers that will be worn only a few times seems completely pointless.

It’s both wonderful and frustrating in equal measure to have this dilemma.

For obvious reasons I’m over the moon with my progress – and it makes me ecstatic (plus as I type it puts yesterday’s excesses firmly into perspective) but it’s annoying because I know that it’s a waste of time buying things that won’t last.

As I read back over what I’ve written however I’m reminded that this is why I write my blog. It gives me the benefit of perspective.

When I sat down to type I was soggy, peeved with my eating – and generally feeling a bit glum about my lack of exercise yesterday. However my endless logging and documenting of everything that I do (which must often bore you poor souls reading) continually pays huge dividends for me.

It’s absolutely great when I can post before and after pics with a gap of a year that show radical change – but honestly sometimes I need something a bit more subtle. It’s easy in lower moods to convince myself I’m making slower progress as time goes on – but I’ve just proved (in real time to myself as I write) that even in the last few months there has been noticeable improvement.

So I’m going to keep walking and getting wet inside and out for the time being.

I’m also going to not beat myself up about not completing my workout programme. At least I’m getting up and doing something instead of nothing.

You know what internet – I’ve just talked myself into walking in the rain again. If anyone needs me I’ll be stamping in puddles and getting soaked outside with a big grin on my face.

Oh – and if a certain purple person is reading – chin up chuck. You’re doing just great and will be back on track in no time 👍🏽

2 thoughts on “Stamping in puddles”