Today has the capacity to be a downbeat one – but honestly I don’t plan to let it get the better of me.

I dislike dealing with officialdom at the best of times, and today is unfortunately one of those days where I have to. Although I often find that the reality of such encounters is far better than the confrontation I’ve imagined it doesn’t make any such appointments less stressful for me in the lead up to them.

Since I need to create my own positive mood today (no-one else will do it for me – it’s just me vs men in suits) I woke up this morning with a basic plan in mind.

Firstly I had a shopping delivery to get out of the way.

No – you haven’t misread that. I’m still tighter than a camel sphincter in a sandstorm – but I got an £8 voucher from Sainsburys online (with free delivery) if I spent over £25. It sounds daft – but even with almost 1/3 off my shopping this voucher is still not necessarily cheaper than shopping at Aldi – unless I used it to buy items (in bulk) that I knew were cheaper or unavailable at Aldi or Lidl.

So – I ordered 6 bags of Soya mince (£1.50 for 500g. Sainsbury’s own brand is really tasty in a chilli and very low calorie compared to meat), and 8 bags of espresso coffee -which was on special offer anyway.

What arrived was four bags of mince and two bags of soya protein meatballs (also £1.50). When the guy on the doorstep saw my crestfallen look he refunded (and let me keep) one of the bags of meatballs, saving me a bit more money and I signed to let him go on his way.

Until that was I put all the coffee on my kitchen counter and realised I’d bought beans not ground coffee – when I don’t have a frikkin coffee grinder!!! 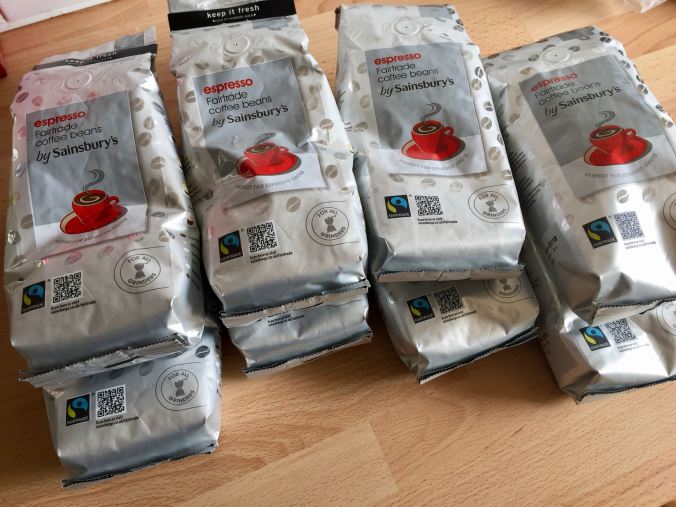 Still – it’s at least amusing, and probably a very good opportunity to buy a cheap one and get all snobbish with some freshly ground beans when people come over for tea parties.

In a round about way brings me onto my mild cliffhanger of an ending yesterday. Although my walking and climbing was finished by the end of my post, a (possibly) new love affair with coffee and a brand new chapter in my fitness was beginning.

Firstly my friend decided he no longer wanted his coffee machine (he was upgrading) and in an act of brazen generosity gave me his old Gaggia. This is a little more ‘hands on’ than my other alternative ways to make coffee – but (from my experience in the brief period of burly barista style ownership so far) produces espresso shots at a strength that ‘blow the bloody doors off.’

However – this enhanced sense of energy came in very useful after my shopping delivery.

So – onto the second thing I left out of yesterday’s post.

For some time I’ve been pretty paranoid about a certain method of personal transport. I have many bad associated memories of breaking them, bending them, and falling off them when I couldn’t support my own weight. I’ve frankly been a mass of negativity and pessimism about this particular way to get fit.

So I’m experimenting a little, challenging myself and branching out.

Yesterday I took ownership of the first bike I’ve owned in nineteen years.

My friend sourced it for me cheaply around the corner from him (it was only £35 – yay!) – went and had a look at it on Sunday night, and had it waiting for me in his garage when I arrived. It comes with a nice, thrifty ‘pre-loved and a little rusty‘ vibe to it – and really doesn’t look like an item that will attract many bicycle thieves – which was one of my other concerns.

I drove it home yesterday evening from Derbyshire on a borrowed bike rack (something else I was pretty wary about, having never attached one to my car before) and parked it up in my hall where I could quietly view it with unguarded suspicion and wariness.

I was still looking at it with the same expression whilst I sipped my second espresso shot this morning.

Faint heart never won trim waistline though – and before lunchtime I took it out for it’s first spin!

Honestly I’d built it up in my mind to be way worse than it was in reality (which I’m sure you’ll agree is a theme of people with weight or fitness issues that stretch back many years) and I was surprised at not only at the distance and speed that I travelled, but that I was cycling up gradients (albeit not insane ones) without any problems.

The gears worked fine, the brakes stopped me when things crossed my path and the bike felt sturdy – if maybe a little ‘boneshakery’. The only issue I had was with the saddle coming loose and slipping back a bit close to the end of the ride, separating and invigorating certain aspects of my undercarriage..

Who needs testicles anyway? I have it on good authority from my lady friends that they’re totally overrated.

When I looked at Apple Watch’s stats upon arriving home I’d done a little under 6.5 miles in around 37 minutes. This is particularly interesting because thats almost exactly the distance my exercise bike says I’ve travelled in the same time frame – which means it’s actually relatively accurate!

Anyway – it’s still early days. My friend is one of the ‘lycra elite‘ and I have a long way to go before I reach the dizzying heights of his Bradley Wigginsesque accomplishments – but it’s a start.

Only time will tell whether this becomes ‘a thing’ for me – but at the very least it gives me new travel options for work and shopping. At the very least I feel pleasantly well exercised today and I still have a whole bunch of walking left to do this afternoon – so as far as I’m concerned it’s already a good day!

And on that note internet I must head off to do battle with officialdom.