I’m trying not to think too much about tomorrow’s weigh in – but I’d be lying if I said it wasn’t on my mind at the moment.

Although I’ve not had any major ‘falls from grace’ I feel with the loss of daylight since the clocks changed and the (flipping ridiculous) cold I’ve probably eaten more in the evenings than I otherwise would have in the summer when I was out and about more.

I feel that I’m in a kind of squirrel like ‘hibernation mode’ – and as well as wanting more (metaphorical rather than actual) nuts I’m also in need of more sleep. Whereas I was naturally getting about 6 hours shut eye in the summer, now I’m regularly taking advantage of 8-9.

It may have something to do with the fact that it’s generally darker or that I just sleep better in a colder environment with a warm bed (and fleecy jogging bottoms, a teeshirt, sweatshirt, hoodie and thermal socks) but I have no idea why…

This is on top of the fact that even though I’m only walking slightly less every day I still feel that I’m not doing enough. Honestly if the weather and light conditions were more accommodating I’d be pounding the pavements late into the evening – but I’m not going to do it if i don’t enjoy it (on my own it’s just grim in the evenings now) and resent time I’d rather have spent doing something more fun now that I’m working.

And that leads me to another thing.

Currently every weekday looks the same in my stats. Working again has effectively made apple watch continually create ‘the twin towers’.

I’m still averaging around nine miles a day (thanks to a usually very active weekend) but currently the huge gap in the middle is completely unavoidable. I now sit all day long and if I want quick money there’s no immediate way around it.

I’m also regularly back in an environment where ‘birthday food’ is a thing.

This week has seen cheese and crackers, cakes, mince pies, biscuits, vegetable samosas (Davey Kryptonite) and fish pakoras along with other various nibbles sitting in between me and the kettle when I go into the small canteen area.

Temptation is everywhere! We even get helpful e-mails arriving with notifications of the pending temptations just in case we randomly miss them. 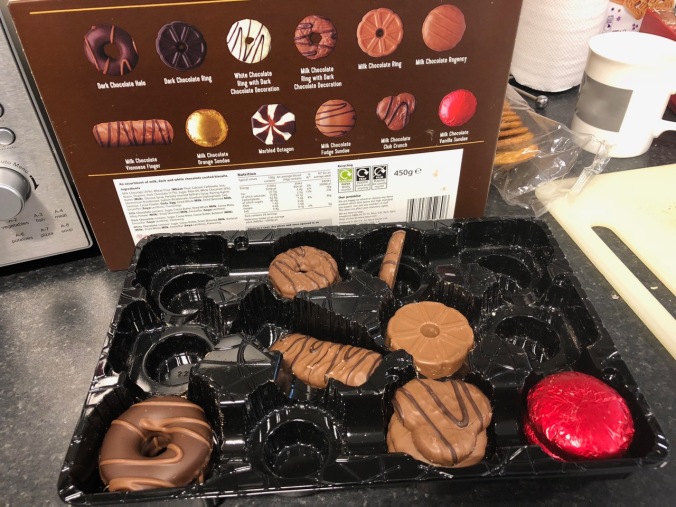 However – I can accept this.

It’s a fact of life and in the same way as I can happily stand in a bar without falling face first into a glass of wine or a pint of beer I’m content to eat my own packed lunch and let everyone else indulge.

Sitting down isn’t really a massive issue either as long as I’m still getting the exercise I need every single day – and so far I am. 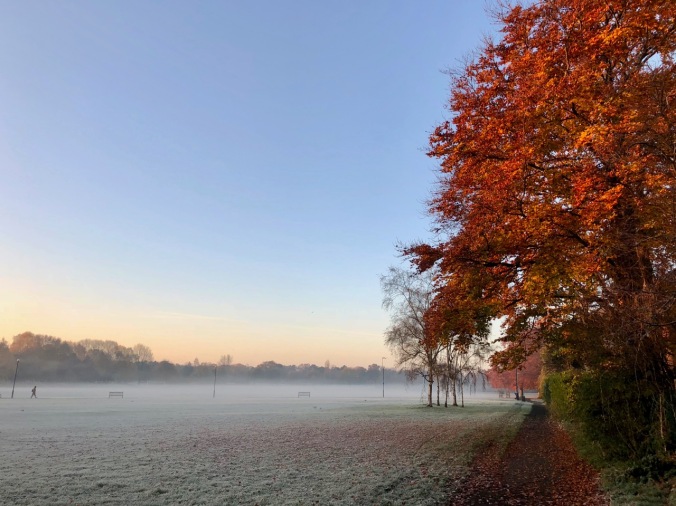 With precisely this in mind this morning I headed out early to get an extra extra mile or so in on the way to the office – and I’m really glad I did. The added distance around the park was a truly lovely spectacle as the sun rose and steamed the frost slowly off the surrounding grass and trees.

Although it took me an hour and a half to walk to work (normally it’s about 55 minutes each way) it was soooooo worth it.

I find that although everything is freezing even if I wear four layers that after around a mile to a mile and a half of brisk walking I’m as snug as a bug in a rug. However – without a beard (which I sometimes miss having) my face is currently experiencing regular bouts of rigor mortis.

Smiling for a selfie when all I can feel is frost is consequently something of a tough sell, so you’ll have to excuse the expression. Personally I think I look like I have a frozen carrot secreted somewhere about my person – but I may be overstating matters.

However I’m not sure I want to be beardy Davey any more anyway. I can’t imagine having fur everywhere anymore… Although a year ago my face was less chilly I didn’t like it as much…

There are other things however that make this kind of early morning jaunt really worthwhile.

Sitting at home, unloved and ignored was my car. 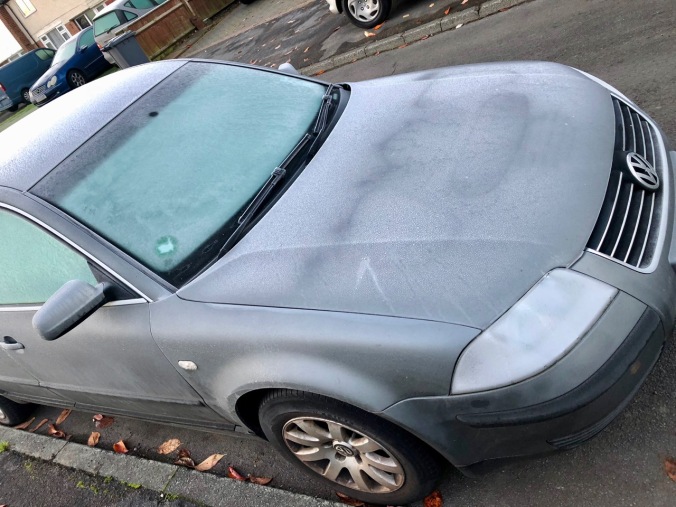 In my old job I can’t even begin to calculate how much time I spent scraping it’s windows in winter, continually running the engine to defrost it, then once it warmed up sitting in traffic waiting to get onto one road or another after I left my house – but more importantly how much money I spent travelling 14,000 miles a year to work and back.

Frankly I’d rather eat my underpants than do that again. It’s used only for pleasurable things now or particularly bulky shopping that weighs a ton or will defrost if I carry it home. I can get to work under my own steam.

When I do this is the result.

So – whilst I could drive to work in around 15 minutes, as opposed to around an hour of walking – look what the alternative is.

I’m fitter, healthier, more alive, less trapped by convenience, less tied down by costs, kinder to the environment and in every way worth measuring I am living an infinitely better life than I did two years ago. Furthermore I get to see all of this under my own steam with the benefit of a clear mind and a body that benefits from positive life choices and now genuinely enjoys the feeling that it gets from making it’s own way to wherever it’s going.

Screw the car, screw the biscuits, and screw feeling anything less than as good as I physically and mentally can. 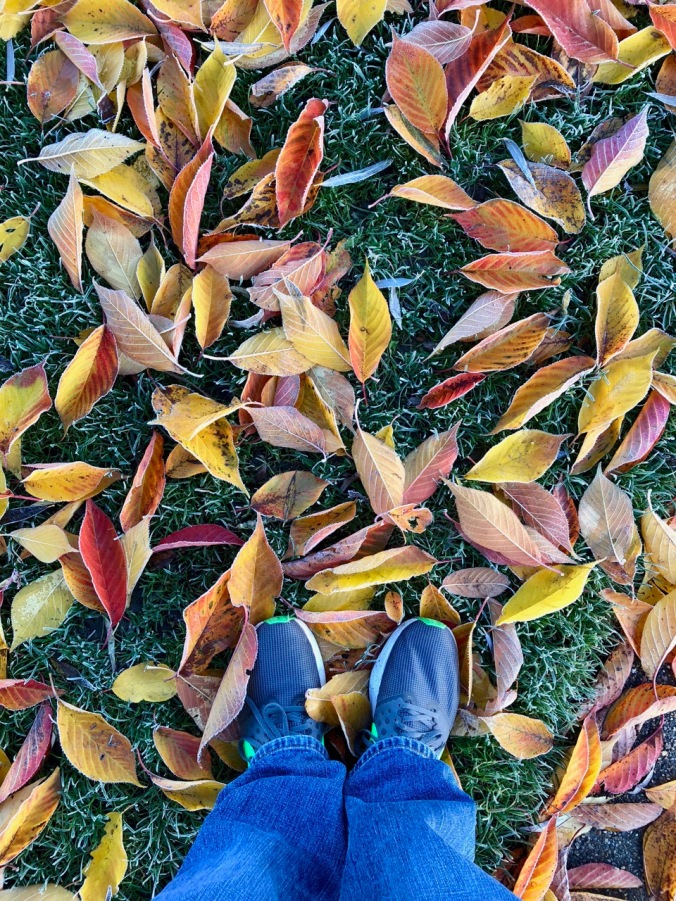 Life’s about living – and regardless of what I eventually end up doing in the future at the moment I’m living a good life. 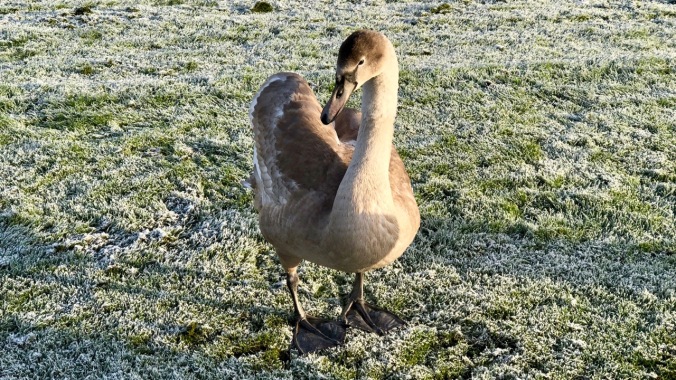 Now – if I can please please have a good loss on the scales tomorrow that would really make my week internet. If you can all collectively think floaty thoughts for me then maybe we can sucker the scales into telling me several pounds have evaporated.

9 thoughts on “The twin towers”