It’s Friday – and more than I have been for a while lately I find myself both preoccupied and a little concerned about my weigh in on Saturday.

Although I don’t feel that I’ve lost my way in any significant sense I do have a lingering feeling that at the very least I’ve temporarily misplaced my mojo.

Whereas this time last year I was rattling along at a very respectable three and a half pounds a week loss on average I now feel like I’ve been becalmed.

Although I want to lose more weight and I’m doing just as much exercise as ever (slightly more actually) there hasn’t seemed to be much wind in my dietary sails over the last two weeks.

I’ve definitely not been myself emotionally – as my posts have probably periodically indicated (link) and with good reason. Some poignant anniversaries have passed recently and I’ve been a little taken aback by the tears and upset they’ve provided.

It’s been a period for reflection but I’ve hopefully begun to emerge on the other side in a (mostly) functional state.

Thankfully for the bits that still need time to heal there’s always a Boris. 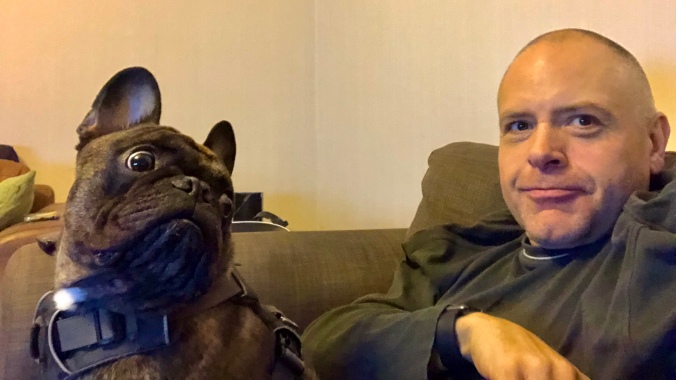 I can’t help but feel better when he and his owner pop round to say hello – and I’ve noticed that the more this sweet, grunty little frenchie gets to know me the more likely he is to automatically jump onto my lap whenever he comes to visit.

Although I look like a hair bomb exploded on my jumper when he leaves I can’t deny that he really cheers me up – and manages (at least temporarily) to take my mind off the fact that for the last month I’ve gone pretty much nowhere in weight loss terms.

Part of me has been sorely tempted to just ‘call target’ as they say in Slimming World and stay right where I am.

After all – all of my clothes look great, I’ve no intention of putting any weight back on, I can walk into any high street store and buy something to wear, I’m fitter and healthier than I’ve ever been in my entire life and I only seem to want to do more as each month passes.

So why am I looking at my target and not letting it go? 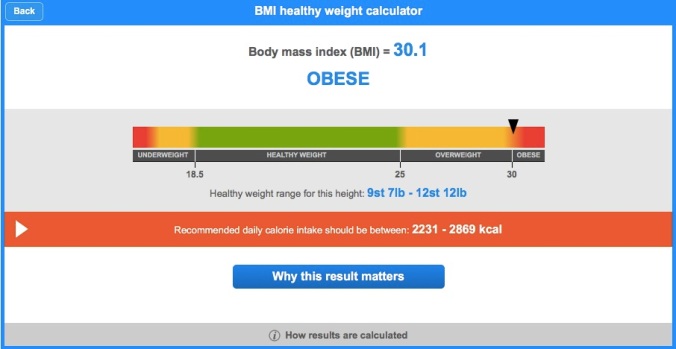 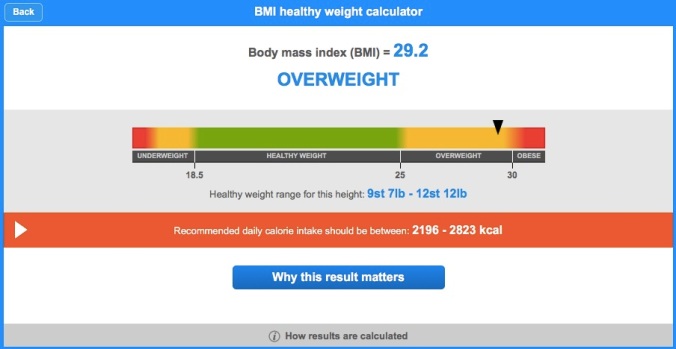 It would be really really nice to no longer be classed as obese. I’ve been medically categorised this way for the whole of my childhood and (almost) all of my adult life.

However the ridiculousness of this rigid scientific calculation isn’t lost on me.

My ‘healthy range’ starts at 9st 7lbs. At that point (if nothing else) I’d at least be more than prepared to audition as an extra in Hollywood’s (probably inevitable) remake of Jason and the Argonauts… 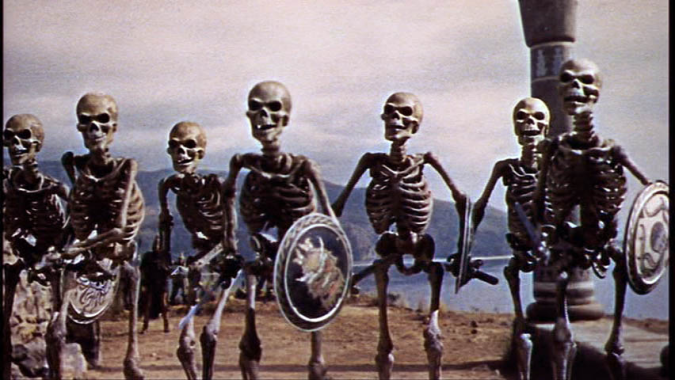 It still bugs me though – and like many aspects of extreme weight loss I’m often confronted with somewhat odd and illogical internal conversations.

Why does it all matter?

Why does a number bother me?

I’ve told plenty of other fellow slimmers that it’s how you feel that counts – not an arbitrary number on a scale or a stupid BMI chart, yet I still don’t seem to be able to accept my own advice.

It’s one thing to physically lose it all – but it’s quite another to address how you feel about the whole process.

I think that part of me is of the opinion that as soon as I stop losing weight that I’ve failed somehow – even if I’m already in a range that people say I look good in. I still see stopping as getting comfortable and complacent yet nothing could be further from the truth.

I finished Jan with the same ‘write everything I eat down’ mindset. I had managed to maintain it for 31 days straight.

On top of this I just keep walking and I can’t stop. 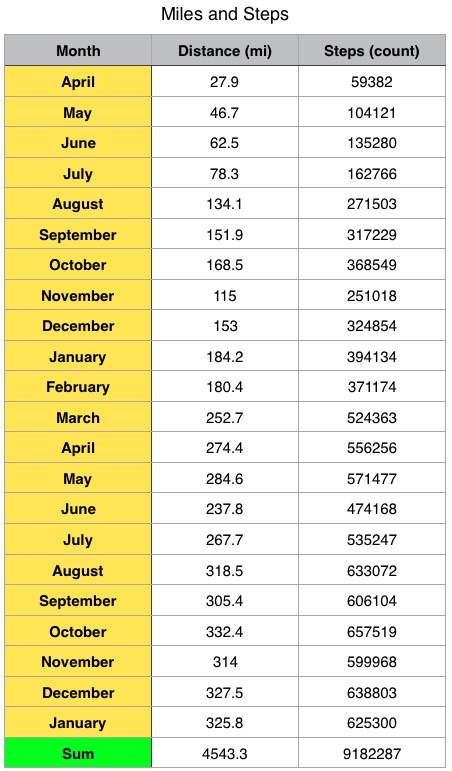 I don’t know anyone else in my peer group that walks 70+ miles a week, every week over and over again, yet for some reason I do. There’s something internally that’s driving this behaviour and it’s by no means a part of me that’s intent on slacking off.

In January Apple Watch set me a task that initially I thought was a joke – but when I worked it out all it was encouraging me to do was keep on with what I was doing already. 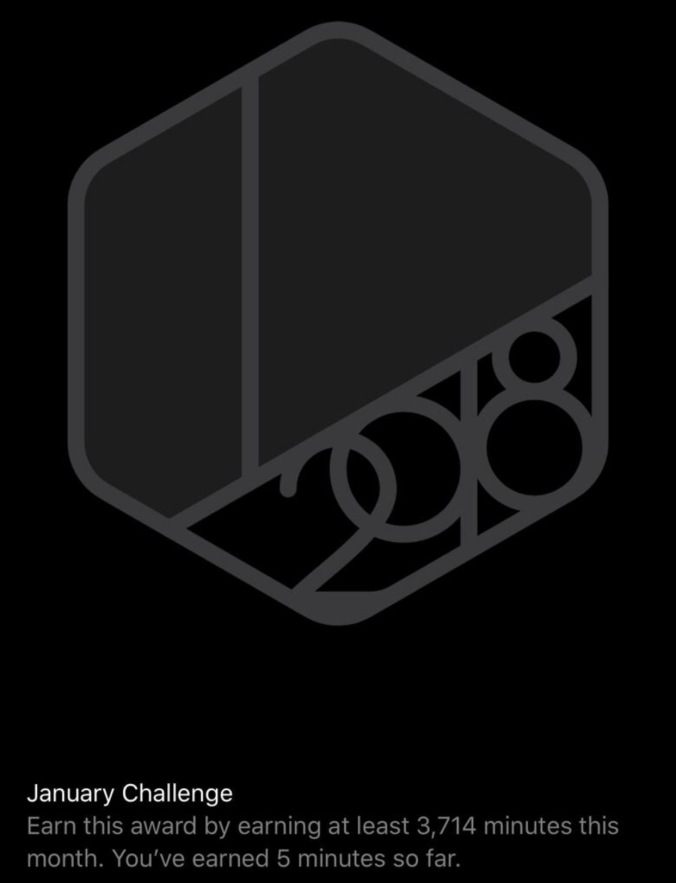 It had been watching my exercise levels – and in an effort to keep me on an even keel decided that I’d only get an achievement if I kept up the good work.

Just to make absolutely sure I’d hit target I ended up earning this a day early (hence the number in the screenshot) and including the 31st I did 3906 minutes of exercise in January. 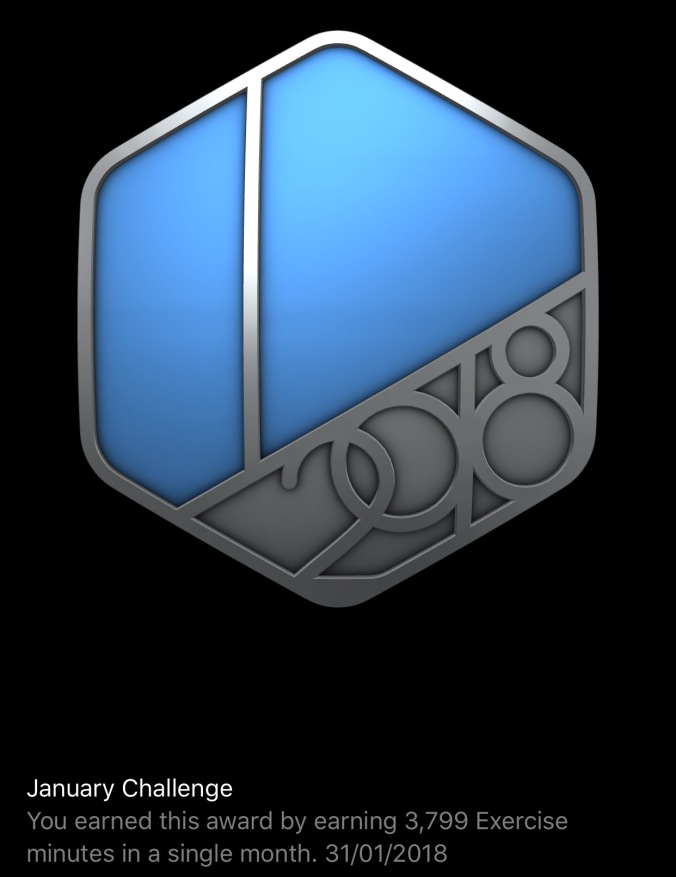 Back when I first joined slimming world in April 2016 I was doing a frankly pathetic 5 minutes a day. To put this into context my daily average exercise for THE WHOLE of 2016 was an average of 11 minutes a day. 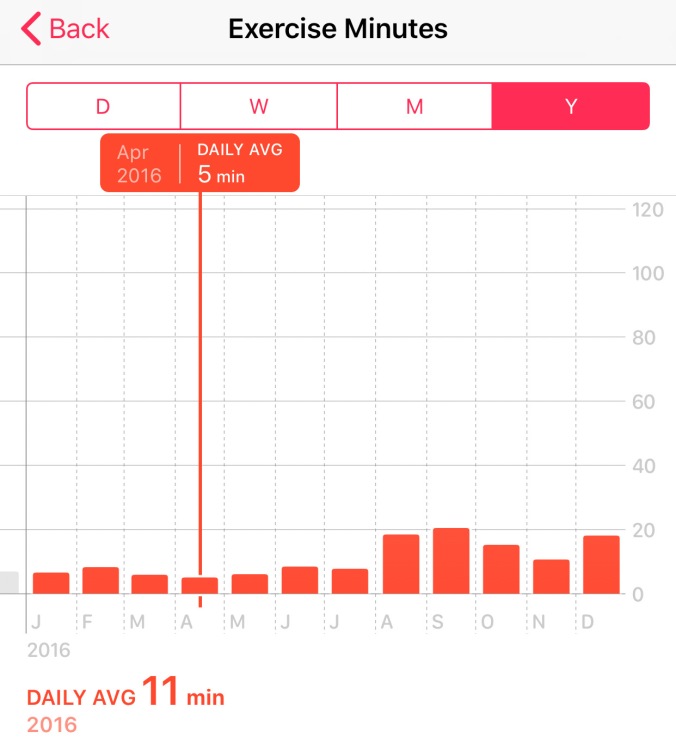 So why do I feel like my dietary mojo is ‘relaxing’ and why is it filling my thoughts?

Maybe I’m classifying it incorrectly. Maybe my mojo has actually just reached the point where it doesn’t really want to shave any more calories out of my diet just to drop a few more pounds.

Maybe I’m just happy with how I feel now and what I eat?…

Am I showing weakness at the worst possible moment – or is this (like so many other things recently) entirely in my head?