The day stared with a bit of a surprise. I noticed a slip of paper by my front door telling me that a neighbour had a parcel for me.

I nipped over the road to collect it.

Without any fanfare it seems that the guys at Slimming World had sent me a really nice little care package with some bits and bobs for me to try out based on my interests.

In this case my love of cooking from fresh.

They had included a funky Slimming World apron and a copy of their new ‘Take 5’ cookbook – which is currently free in groups with a 12 week countdown.

(Yep – that’s a shameless plug. I believe in going to group and I believe in the recipes and plan. It’s not sponsored. It’s just my honest opinion which happens to match theirs!) 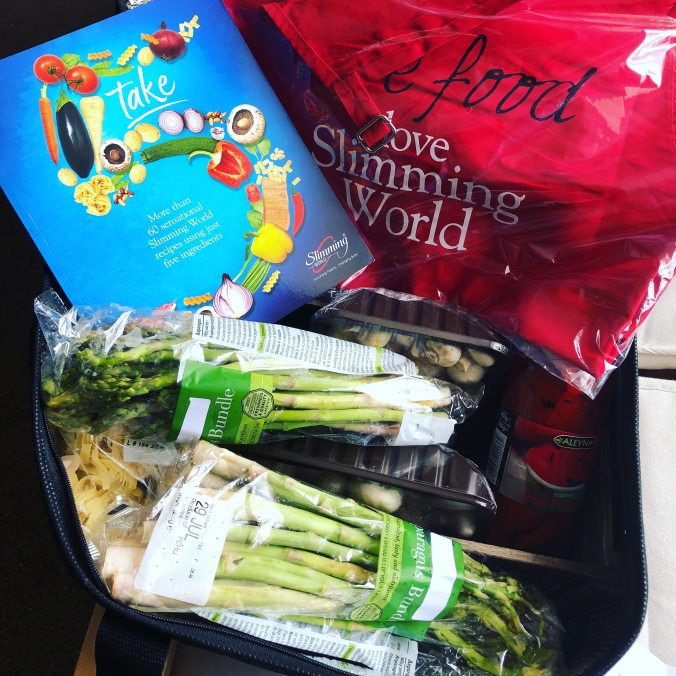 The truth of it is this is something of a timely arrival because while I was in London last week I couldn’t put my recycling out – and because I didn’t do that I now have three weeks worth of plastic waste awaiting collection.

It will be four by the time they collect it next Friday – and this growing little pile of pots that I’ve been diligently washing and stacking in my recycling bin on a daily basis demonstrates that I still have some compulsive behaviour patterns and I that at heart I’m still a creature of habit.

Not only do I feel happy when there’s regularity but I really like cottage cheese with onion and chives from Aldi.

It’s now become my daily treat rather than a kebab (2000kcal) or a bag of chips (1000kcal) and at around 170kcal a pot I think it’s a pretty darned great substitute.

Variety is the spice of life however – so I’m gonna cook something NEW with all their ingredients and tell you all what I think.

Well I had a great time!

All of the ladies were in fine spirits and one of them had even brought along her super cute French Bulldog to say hello.

He’s a happy little two year old who has a real enthusiasm for investigation – and he spent most of the session meeting and greeting people by nudging his way between chairs and sniffing people’s bags, legs and hands.

How lovely is he?!

However – cute hounds aside you probably want to know what went on when I stood on the scales.

My weigh in today went well and was an (expected) gain – but I’m still well within my target range. 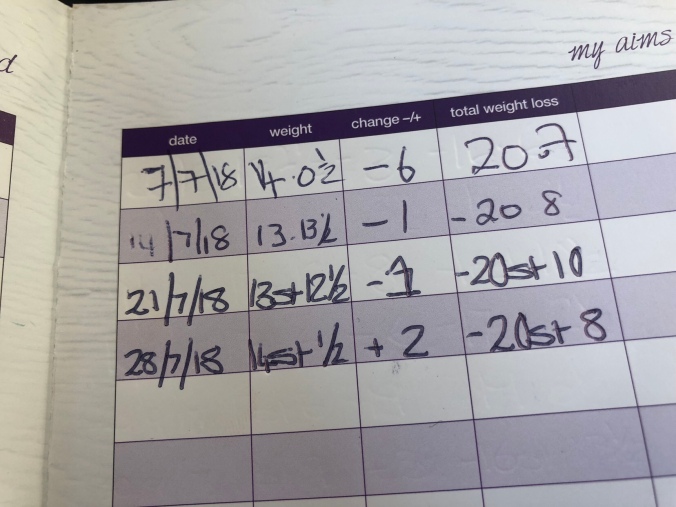 To be honest I thought it would be worse because this week has been a bit of a long one.

I was going to say ‘tough’ but that would be overselling it somewhat because it hasn’t been particularly hard in the great scheme of things.

I just feel a little ‘depleted’.

An ever present underlying tiredness when I wake in the morning has led me to eat a little more than I normally would and I also seem to have retained a bit more fluid.

Heat sucks in this respect.

The weather has also made the walk to work and back something of a sapping task and I’ve seen my split times for the miles I’ve covered decrease from just over 15 minutes to over 17 on occasion.

I haven’t walked that slowly for a long time – but crucially I’m still walking. The heat is a powerful motivator to sit down and do nothing – but I refuse.

Mostly because of sheer bloody minded obstinacy my current monthly average distance per day is sitting at an all time high and despite a historic heatwave in the UK that’s been going on for about six weeks by the end of yesterday I was up to 11.4 miles a day for July.

I have to say though that something has been playing on my mind regarding distance walked – and despite promising the PR ladies of SW that I wouldn’t read the comments at the bottom of online newspaper stories about me, one day last weekend I did.

The comment (on the Daily Mail site) was actually the only even vaguely critical one out of many many supportive ones (no-one could be more surprised than me) and I don’t know why it stuck in my mind – but it did.

‘He looks great, well done! That said, I do wonder where he finds the time. It will take most people 2 hours to cover 10 miles (16k!) ; that is 14 hours a week on top of work, commute, chores, errands and a substantial time spent on cooking from scratch. I am all for an active lifestyle, but for most people it would be easier and more maintainable to aim for 3-5 miles a day and just eat a little less.’

It’s actually quite a nice comment in its own way and what he/she says is all quite true – although the commentator clearly doesn’t realise that my mileage is partially thanks to my commute rather than in addition to it.

(For the benefit of newer readers I walk a total of six miles a day back and forth to work and two miles occasionally at lunch if I have a break.)

I guess it tugged at some buried guilt though.

This is regarding one of the things that I’ve written about a lot – but few I’ve been unable to ‘fix’ and still consider it to be a ‘weakness’.

So far I’ve been unwilling to address portion sizes in any measurable way.

The brutal truth is that compared to other people I still eat a lot.

Many would probably say I eat too much when compared to a suggested portion size – and in truth it’s only possible for me because of two things.

After reading the comment though I started thinking a lot (too much I suspect) about whether I exercise so much because it allows me to indulge like this.

It made me realise that in weeks like this one when I’m tired and I eat a bit more I always have to try and keep a lid on my worst impulses.

Food and portion sizes aren’t the impulses I’m talking about though.

I’m talking about my tendency to over analyse things and look negatively on what I perceive to be my failings when what I should be doing is looking at my successes.

The tendency to diminish your accomplishments when you’re feeling a bit tired or vulnerable is a thing I think all people who’ve suffered with compulsive behaviours share.

So as usual I’m outing myself.

The truth sets you free and when you tell the world how you really feel it ceases to have a hold over you.

The truth of it is that I don’t walk everywhere so that I can overeat – I exercise so much because I know it keeps me healthy and because I flipping love it.

If I’m honest I probably need to eat a fair bit to enable what has effectively become my single greatest passion in life.

It fixed my diabetes, it saw off my high cholesterol and it dropped my high blood pressure like a stone.

If I didn’t do it then I may still have the poor circulation that caused my oedemas and I may even still have gout.

I’d probably not have had the success I did with weight loss.

It’s become so fundamentally tied to who I am now that it’s hard to imagine me any other way.

So – here’s to maintaining, looking at the positives of life, recognising when your mind is working against you and cute little French Bulldogs.

7 thoughts on “Elvis is cute”