The last few days have been quite busy ones, filled by many twalks with lots of people and plenty of miles being slotted under my belt.

On Wednesday I headed over to Arrow Valley with a fellow Slimming World’r that I haven’t walked with for ages and thankfully we timed it really well. The day started cloudy – but then turned into an absolutely lovely afternoon.

We took full advantage of the sudden break in the (up till then awful) weather to do a several laps around the park before attacking the local Harvester’s salad bar.

Everywhere is looking delightfully autumnal at the moment and it won’t be very long before the trees are completely bare. All there’s going be to look up at soon will be twigs and sky. 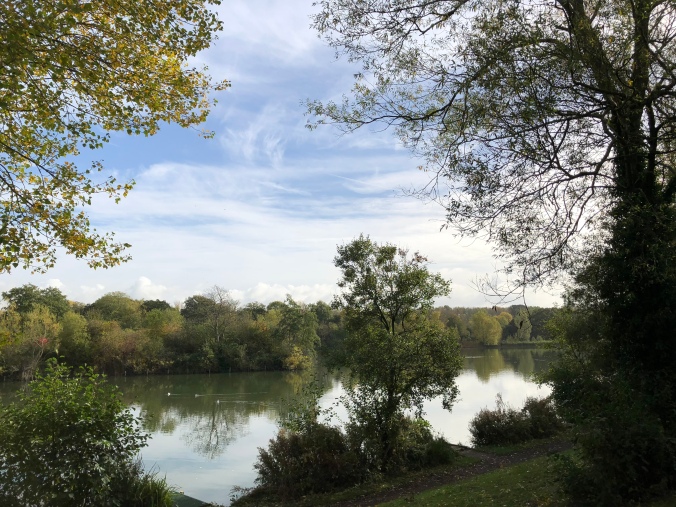 Since forests are going to be rather bland to wander round in the coming months I decided to make the most of the scenery this week and yesterday also visited Coombe Abbey – which I’m hoping is somewhere that I can introduce a couple of blogging friends to soon when they next visit. 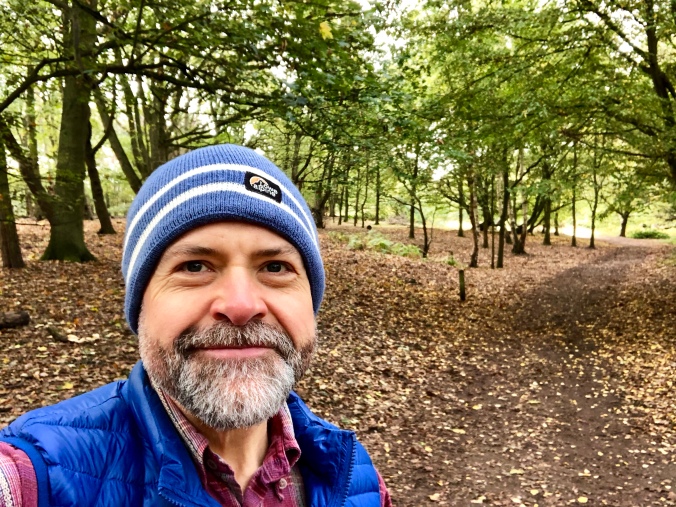 Not only does it have some smashing wildlife there – but also some beautiful landscaping courtesy of Capability Brown. 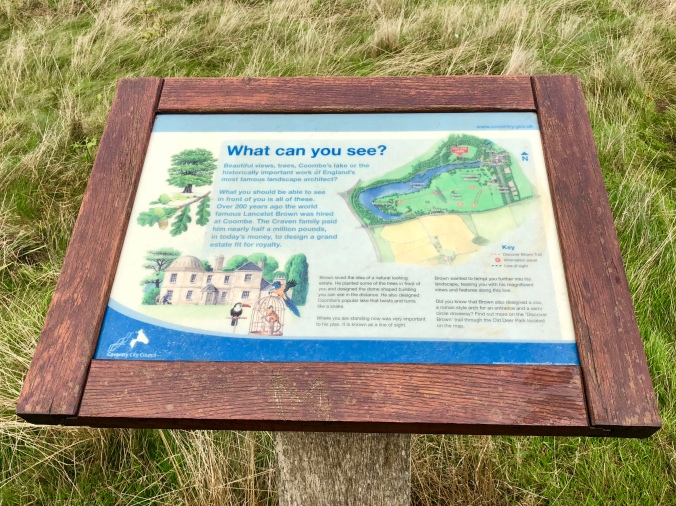 My regular twalking companion remarked that she’d been visiting this location for many years – but until yesterday had never noticed the domed building in the distance, which Capability intentionally (and perfectly) framed with trees and plantings.

My phone (in this cropped and digitally zoomed image) sadly doesn’t do it any justice and neither did the rather grey skies yesterday. I’m sure though that when I bring my photography obsessed friend here (even though it’s likely to be just as grey with a lot less leaves by then) she will be able to present it in a far better light!

When I set out this morning (super early) on my daily exercise the weather was different yet again – and the world was filled with mist and fog.

I’m truly addicted to watching the seasons and weather change around me and in all of the little adventures above (maybe because of this) I’ve felt supremely relaxed.

In between my walks and talks (which since my last weigh in have totalled almost 90 miles!) I’ve definitely noticed a sense of… mental chillaxing.

Initially I (maybe rather negatively) viewed this as feeling ‘vacant‘ – but decided ultimately that a temporary absence of thought isn’t necessarily a bad thing.

I’ve simply stopped worrying about a lot of things that were in the back of my mind and because of this I’ve not been plagued by outrageously lucid dreams and have been sleeping better over the last week.

In all honesty the only thing I’m obsessing over at the moment is a particular item of clothing that I’ve been attempting to find.

I’m trying to build a nice outfit on the cheap and I’m very preoccupied with the task. I’ve spent many many many hours over the last two weeks doing this and whilst this might seem like a complete waste of time to others – to me it’s been a total joy.

I love the challenge of finding the absolute best items at the lowest possible prices hidden amongst things most people would pass by and not give a second glance at.

Since a pre-loved shirt and a pair trousers in my sizes will now typically set me back £4 – £10 for both I have the ability to try new styles and colours continuously.

Since I’m still unsure what my ‘style’ actually is (do I have to have just one?!) I can just keep experimenting. I’m continually looking at different brands, patterns and fabrics everywhere I go and all of a sudden I’m very taken with tweed.

I’m not sure this pattern I spotted the other day would flatter me at all but I LOVE it nevertheless! 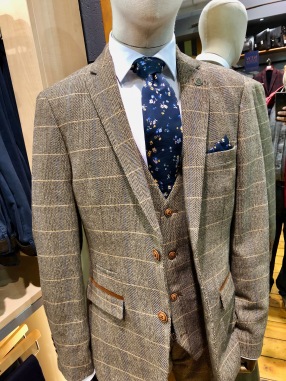 This particular suit is not cheap though (and I’ve zero idea where I’d wear it without looking like a pretentious idiot) so I try to find bargains where I can and not just leap toward the first thing I’m taken with.

Due to my squirrel like behaviour I’m running out of hangers and wardrobe space.

Yesterday I spent a while ordering all of my shirts, trousers and jackets by colour and style. I removed some that I’ve fallen out of love with (or that are now too loose) bagged them up so that I could donate them to the Red Cross and carried them there this afternoon.

It’s a nice feeling to be taking things back to charity shops – and although I’m continually aware that I shouldn’t be too vain I can’t help myself when it comes to constant wardrobe tinkering.

It’s not unusual for me to change my clothes 2-3 times a day sometimes and in contrast there were periods in the past I was forced to wear the same clothes for many days at a time. I never bothered to look in the mirror because the same depressing sight would greet me whenever I did. 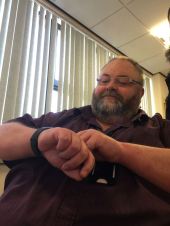 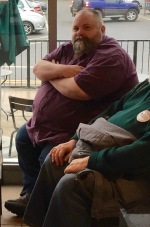 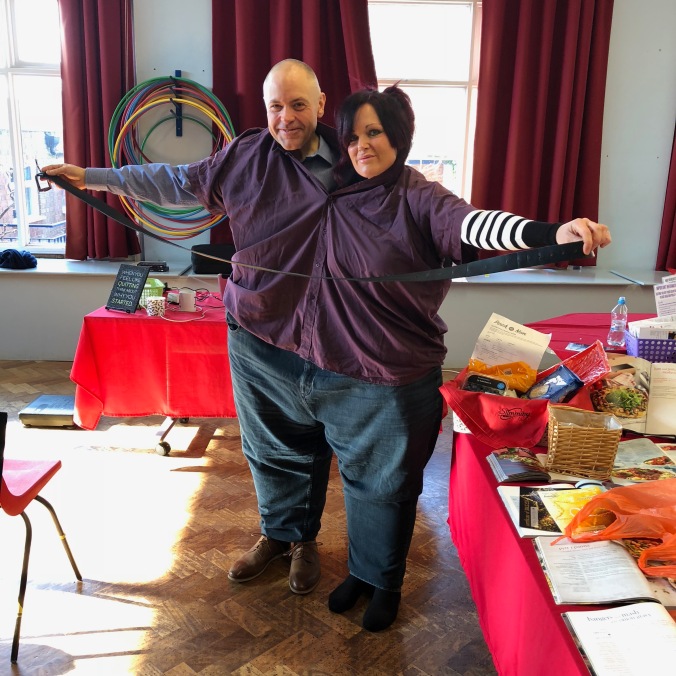 Back then I also used to shop very differently.

My clothes were either purchased online at a specialist outsized clothing retailer or at the local large and tall shop in Leamington Spa – where the owner didn’t look at me like I was a freak.

Typically there weren’t many options in a 66in waist and an 8xl shirt size though and regardless of how nice the staff were the experience was utterly demoralising.

Shopping for anything was exhausting – which was why I usually tried to get my clothes delivered. Even if I made the effort to park right outside the door of a shop and go in I didn’t feel like I could try anything on. The logistics of getting dressed and undressed in a changing room that barely contained my frame wore me out so much that I could hardly breathe afterwards.

I often purchased the first things that came to hand in bulk and because of this I often spent three to four hundred pounds in one fifteen minute burst of shopping. This might sound like a lot – but since a shirt and a pair of trousers in these sizes typically set me back £100+ this was very easy to do.

Honestly I didn’t care how much it costed when I was in a clothes shop. I just wanted the whole exhausting task to be over and done with as quickly as humanly possible so that I could go home and fall asleep in my armchair.

At the very most I repeated this miserable chore once every six months – or if an emergency arose where a belt buckle snapped (a surprisingly frequent occurrence) a pair of trousers burst a button or yet another crotch seam ripped.

It was an experience devoid of any enjoyment for me whatsoever and it frequently made me feel low for days.

I often ended up with £50+ shirts that didn’t fit and was often too ashamed (or couldn’t muster the energy) to take them back for a refund. On many occasions I didn’t even remove the items I’d bought from the bags they came in for weeks (if at all).

I hated everything I purchased because of the failure that the items represented.

Thats all in the past though.

Sometimes I feel that I should have forgotten about all of this by now (aren’t you all bored of reading about this yet?) and just embraced the new me – but truthfully it’s quite hard to do.

Anyway – I’m super super tired now after lots and lots of walking from A to B today so I’ll love you and leave you for the evening.

8 thoughts on “Twalks and tweed”