Although at the time it fitted in quite nicely with my healthy eating regime my epic addiction to walking wasn’t something I planned in advance.

In truth my continued predilection with it related more to the fact that I’m a rather frugal person at heart.

It seemed insane to me that people paid for gyms to use a treadmill when there was a perfectly good pavement right outside their houses.

Furthermore (despite what many may assume) I’ve never felt like willpower was my strong suit.

It will eventually fail – so with regard to health you have to build active structures into your life that have as little friction as possible – but lots of fringe benefits.

Walking everywhere ticked pretty much every box for me.

In the early days it simply saved me money on the way to a coffee shop – and I made a pact with myself I’d never buy a coffee without getting to the cafe under my own steam.

I still do the same thing 99% of the time now and it serves me very well.

It also became a vehicle for socialising – and I’d accidentally I discovered an entirely new source of intellectual and emotional stimulation that also had the added benefit of keeping me healthy.

I fed the soul while I burned the pounds.

Later on it became my primary method of commuting to work and I walked six miles every day without fail thanks to this.

Mostly because of these things (and because I bloody love it) I’m pretty sure that walking will always be a part of my life.

I may just have found another hobby though – because currently all I can think about is swimming.

This morning I got up early and hit the pool again.

My split times seem to have already markedly improved from the day before – which I’m really surprised about. I expected a lot more pain in my arms and in fact when I awoke there was none at all!

Yesterday this was the result.

Today I felt more confident and really rather focused. My technique was noticeably a little better and my breathing had improved. Both need a lot of work though.

I screwed up on the distance today though and accidentally set the length of the pool to 20 rather than the total number of lengths to 20.

Either way I did the same distance as I did the day before in around two thirds of the time. 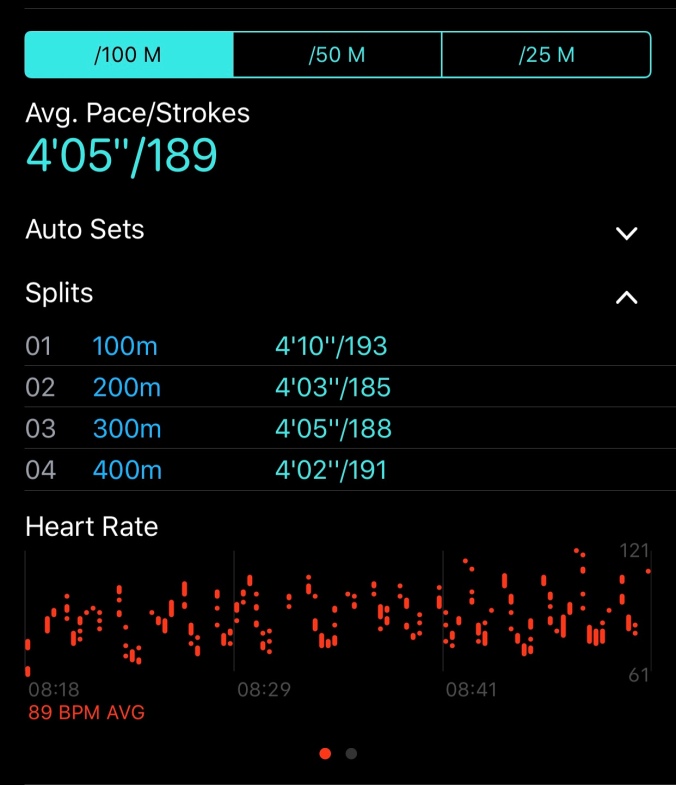 It’s clear that I need to work out exactly how my watch tracks the distance and strokes so that I get a true representation of whether I’m getting better or worse.

It’s a work in progress – but I plan to keep trying hard – for several reasons.

Firstly I was very aware that the same motivation propelled me to get out of bed and go to the leisure centre early this morning as originally motivated me to go walking.

I’ve paid up front, and it’s only worth it if I use it.

If you want to swim at any of Warwickshire’s municipal pools it’s either £4.70 on a pay as you go basis or £25 for a rolling monthly pass (with a £20 one off enrolling fee).

That means in order to make such an arrangement financially worthwhile I need to go for a swim ten times in the first month and six times a month thereafter.

Being tight fisted is a powerful motivator.

I’m going a step further though as an added incentive.

I’d like to at least halve the cost of going for a dip (making it £2.35 a go) and that means I need to go more than ten times a month.

If you can hear a squeaking noise it’s not a mouse. That’s the sound of my ass cheeks rubbing together…

Slimming World motivates me along the same lines.

As a target member I get to go to group for free as long as I remain within my range – and it’s a great incentive to keep trying hard every week.

The swimming has really helped me in this respect. Today and the day before have seen numbers of daily calories being burned (According to Apple Watch) that I’ve not experienced for quite a while.

Yesterday alone I finished the day on nearly 5000 (although to be fair on top of swimming half a kilometre I also walked 17.5 miles) and I’m on for a great total today too.

All of this meant I had a chunky 3lb loss and for the first time in a long long time I also won the slimmer of the week!! 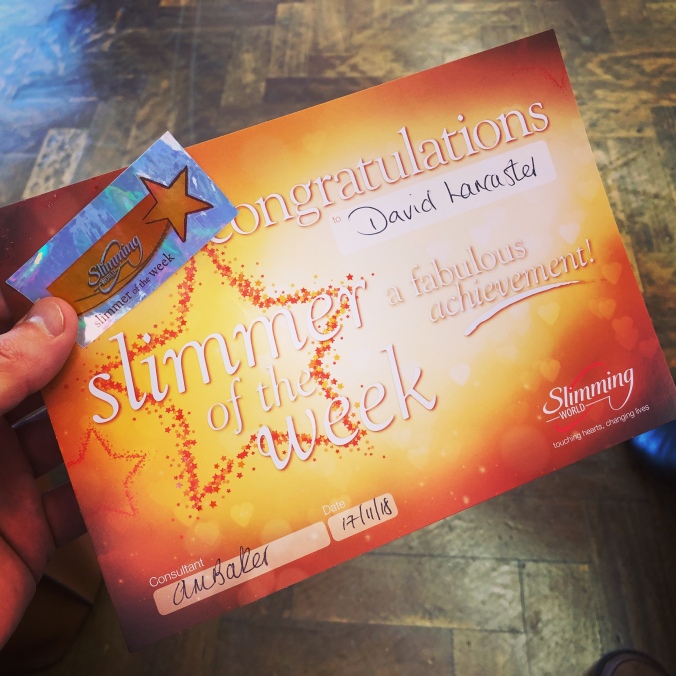 It’s also impacted my mood today from another perspective – because today my worst nightmare arrived.

I was a little surprised yesterday when I found that the Warwickshire changing rooms are now unisex.

That’s ok though – there are cubicles and in the morning it’s quiet. I’m not a prude either and in principle it doesn’t bother me.

Today though (directly after the morning fitness session) is a ‘learn to swim club’ with tons of little kids – and the unexpected side effect of this was that I found myself surrounded by lots of fully clothed mums and dads while I was standing in the shower in my Lycra pants.

But you know what?

After all the lengthy and fearful preamble to my inaugural swim yesterday I have realised now how much it doesn’t matter – and frankly I couldn’t care less if I’m standing topless in front of people who are either the opposite sex or fully clothed.

This is something quite profound.

I’ve actually made something of a massive mental leap in a very short space of time – because if (after years of fearing this) I can take off my clothes and stand, imperfect and half naked in front of random strangers then I can stand in front of a prospective partner and do the same.

The truth of it is that attractive people rarely look like someone we’d want to get to know if they lack confidence and stare at the floor.

Confidence is an alluring quality in itself and I aim to cultivate this part of me whether I’m standing in a three piece suit or the one provided for me on my birthday.

My personal project to increase my unclothed self confidence is in full flow internet.

I’m on the case and chasing improvements wherever I can find them.

8 thoughts on “Squeaking from below”