I’ve had a lot of success this week.

Since I started swimming again a really short time ago I’ve been going daily and working really hard to improve my stamina and times.

By Friday I’d progressed to the point where I was able ( relatively easily) to swim 1km in the same time as it took to do half that distance when I started.

Furthermore the first 500m of this is now almost continuous – although I have to pause a little at either end every 4 (ish) lengths.

I’m really impressed that I’ve managed to shave a whole thirty minutes off my original time in just 8 days.

However whilst I’m amazed that Apple Watch records stroke and biometric data underwater I’m less impressed with it’s continued predilection for randomly stealing 25m from my stats here and there.

20 lengths all too often gets recorded as 19 and I have no idea why.

I don’t really care though – because what’s more important to me than the time improvements though are my cardio profiles. 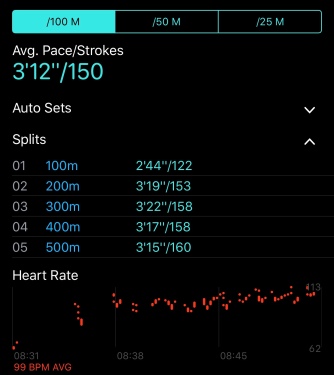 With a gradual (but really noticeable) increase in my shoulder and arm strength I’ve managed to sustain my heart rate at a higher bpm for longer every day. In just over a week It’s gone from a graph showing huge peaks and troughs to one with much more consistency – and that makes me really happy.

Regular readers will know though that I can be mildly obsessive.

It’s both a blessing and a curse – because whilst it’s enabled great things in my present I know only too well from past behaviour that it can be very detrimental to me if I’m not careful.

I can be my own worst enemy.

So far, rather than diminishing my walking distances (since I’m now spending around 45 minutes every morning swimming up to 1km) I’ve actually maintained the same level of activity there too. 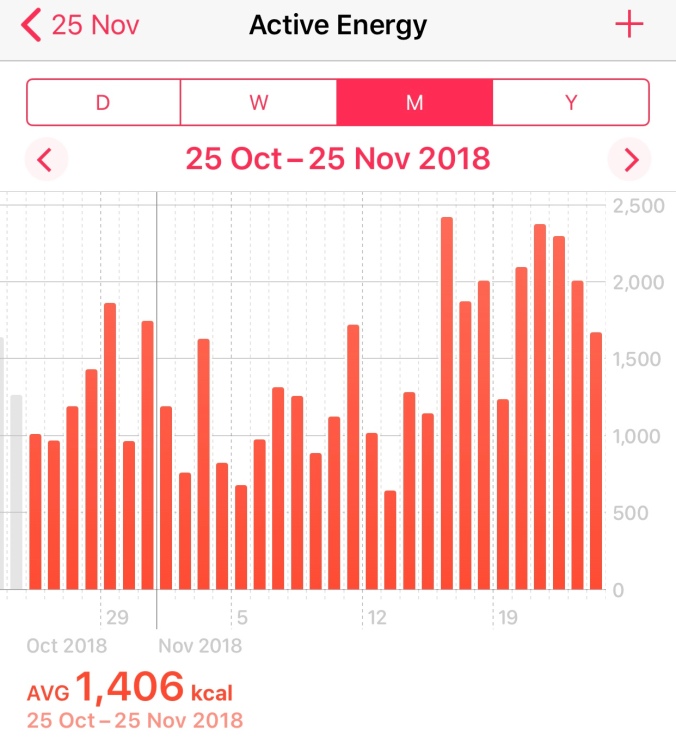 That’s great – but it’s also caused a noticeable (and disproportionate) increase in my appetite.

Since I started swimming regularly (If you include a standard daily amount of 2500kcal for a man) I’ve been burning 4500 – 5000 total kcal a day – and overall my general activity has significantly increased.

Consequently it’s been hard to keep a lid on my impulse to just carry on eating until i’m stuffed during the evenings, and some days in this respect have been better than other (not so good) ones. This made my weigh in on Saturday a very hard fought maintain

I pulled it around only in the last three days of the week.

On the plus side though I still did it – and this result means that I’ve nearly managed two whole months of losses and maintains without a single gain.

Probably as a consequence of my focus at the moment (combined with all of my extra activity) my right butt cheek is currently killing me. Yesterday (or the day before) I strained or pulled it somehow and when I move it’s causing me to stiffen up and limp.

Even with this annoyance there are things to be grateful for though. I prefer a tangible muscle strain to the amorphous and vague sensations of vertigo any day of the week.

At least it’s something that’s quantifiable and easily treated with rest.

So – rather than swimming back and forth at the crack of dawn this morning I’m instead forcing myself to take a recovery day and sitting here with a cup (or three) of coffee, listening to music on YouTube and reading whilst I dip in and out of writing this post.

I guess I’m still learning to chill out and be kind to myself – just as I keep telling other people to be when they ask me for advice. This mindset is particularly important to cultivate at the moment because anyone who tells you that remaining at target is as easy as losing weight is a dirty fibber.

Initially I didn’t find it much of a challenge – until I moved my goalposts down by 7lbs for the MOTY competition. 14st 7lbs seems (maybe in retrospect) a much easier place to stay than 14 – and I’ve no idea why.

I often feel like my body seems to lean towards the higher number all the time.

There are moments when I’m totally in the zone – but there are also others (like last night as invisible food fairies relentlessly consumed the contents of my fridge) when things aren’t so easy.

Mentally it’s sometimes also really tough to see a ‘maintain’ in my book and look at it as the total victory that it is. The psychological transition from being regularly praised and rewarded for losing weight to being expected to stay the same week after week is a hard one to get your head around at times.

When you get to this point in a journey like mine I think a conscious mental pivot needs to take place.

Your mindset has to change from one where success is defined by constantly heading on a downward trajectory to a recognition that your new objective must be consolidating what you’ve regained in life and marrying these wins with a constant drive for improvement in other areas.

Staying the same weight when you reach target quickly becomes a laborious task that sits alongside other newly important projects – and eventually you recognise that what you’ve actually done is nothing more than to create a solid foundation upon which other structures still need to be built.

This has absolutely nothing to do with watching horror movies or Brexit vs Bremain – but instead relates to dealing with underlying issues of body and self confidence in specific (and largely personal) areas of my life.

Neglecting to do this over the last few years created a crisis point several weeks ago – and has made me realise (if I didn’t already know) that burying any emotion or fear is a short term solution at best.

‘Relentlessly powering through’ is not dealing with tough personal moments in life (although I appreciate this approach is sometimes required) it’s just deferring them until a later date – by which time they will almost certainly be bigger than they were if you’d just strapped on a pair and dealt with them there and then.

Thankfully I feel that things (on a personal emotional level) are really rather looking up – and I’m learning to flex emotional muscles that haven’t been used for a while. With this in mind my current approach (to crib from a well known text by Susan Jeffers) is ‘feel the fear and do it anyway‘.

My reading material lately has reflected this and I’ve been working (slowly) through some interesting books. Today I’m exploring one called ‘Little Wins’ by Paul Lindley.

The blurb on this sucked me in by questioning why as adults we grow away from our child like states of eagerly trying (and often failing) to do many different things to cautiously avoiding situations where success isn’t a certainty or that we think will be diminished in the eyes of others if we don’t succeed.

I’ll let you know if I find anything interesting in it!

2 thoughts on “Project fear and a PITA”