There are times that I’m tempted to not write something down in a post – mostly because I think it will sound silly – but on occasions like today I really don’t care.

Something small has made me really happy.

Ages ago I went for a long walk in the cold with a friend along a frozen canal – and along the way we stopped at a friendly looking pub.

It was traditional and cozy – with a roaring fire next to some red leather seating in the window.

I crouched in front of the burning embers as the barman put another log in the centre and attempted to drink in the warmth as quickly as I could.

Then I realised something.

I’d avoided fires for years because I was always too hot already.

I never appreciated the warmth that they could bring to cold hands – and it was intoxicating.

I really didn’t want to move from that position – but eventually (reluctantly) we had to get a move on and headed out into the cold again.

It’s a happy memory of a cool little non-scale victory.

Today I woke up a little late – after a late visit to the Showcase in Coventry to see the Queen biopic before it was no longer on general release.

It’s a great film (although everyone but Freddie in the band comes across as a bit two dimensional) and the music is wonderful but it made me oversleep past my usual swimming slot.

Looking at the online timetables I decided that I’d give the leisure centre at Newbold Comyn a go instead of my usual pool at St Nicholas.

It’s a longer walk to this location too and it ticks another box exercise wise because currently I am really focused on being in target for my Saturday weigh in!!!

After a 45 minute brisk stroll I was there – and the first thing that I noticed was that there are a lot more facilities.

For one there’s a climbing wall…

I’ve never tried this kind of thing – (and I’m pretty sure my arms aren’t currently strong enough to do it) but today I added it to my mental bucket list! 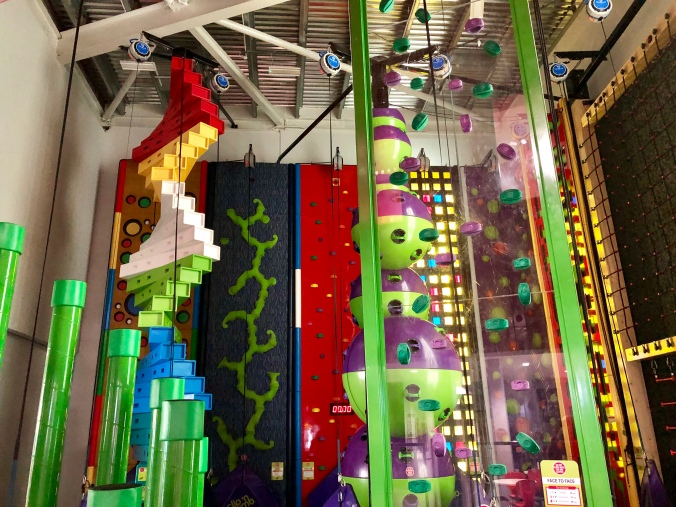 As I walked through to the nearby pool viewing area I realised that the benefit of coming here to exercise is that there’s a leisure pool as well as an exercise one, meaning that you’re far more likely to not be slowed down by kids playing or adults standing oblivious to everything in the middle of a lane (it’s a thing trust me). 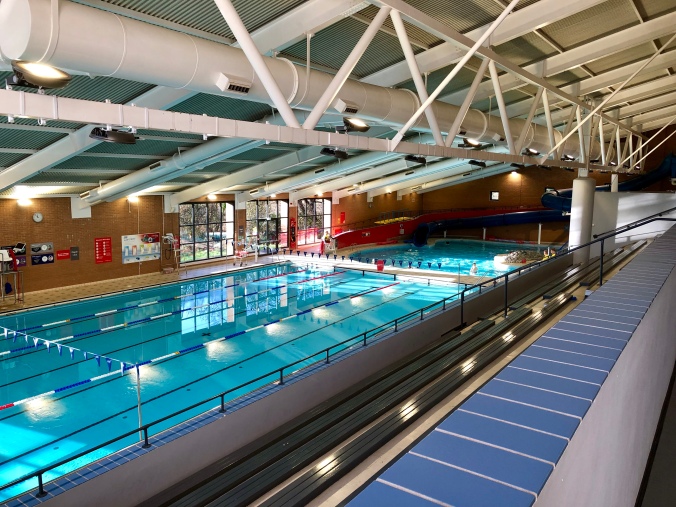 My swim was largely uneventful.

For the most part I had the second small ‘medium lane’ entirely to myself for the hour that I was in the water and absolutely no one to swamp me with butterfly or front crawl waves.

So far so mundane right?

Until I got out.

I’ve never ever sat in a whirlpool spa. Not in my entire life.

I’ve always been far too self conscious about how I look – so even when I’ve stayed at a hotel where I’ve paid a premium for the additional facilities I’ve never actually used them.

There was a lady already sitting in it – but I thought ‘what the hell!’ And just went over and sat in there too!

After an 10 minutes of being gently lifted off the shelf on which I was perched by jets of water being shot up my butt I noticed ANOTHER interesting thing.

Now – you might have wondered why earlier I mentioned the log fire – but it was because this fits into the same category.

I have never had a problem with finding a way to get excessively sweaty in the past (it was my default state) and always considered saunas to be completely irrelevant.

My body back then clearly didn’t need it and I hated heat in every permutation that it arrived in.

I got straight out of the spa and walked over to the sauna, reading the ‘it’s really flipping hot in there – make sure you don’t drop dead’ warning on the wall – and also noted the supplemental advice that the higher you sit the hotter you are.

Moments later I was sitting on the top shelf!

How nice are saunas?!

They are my new favourite thing!!!!

After an hour’s exercise transitioning to a room where the very air around you seems to massage every muscle in your body is flipping heaven!

Furthermore I couldn’t help but notice that after 15 minutes I seemed to be the only one in there that was drying out rather than sweating profusely.

Everyone around appeared to be huffing away and breathing harder – yet I was just relaxed and comfortable.

The only reason I decided to go back outside was that I noticed my Apple Watch was absolutely roasting.

It was probably a good call – because when I looked at the Apple forums afterwards they say the following things are best avoided (if you want your watch to remain water proof).

Either way – watch or no watch this is not my last time in a sauna or a spa pool.

So this day represents not one but two brand new non-scale victories.

These may be mundane or insignificant to other people but to me they both represent huge strides in my self confidence and yet another example of my default behaviour now being ‘I like to try new things’ instead of ‘I fear the unknown’.

I did new stuff and I feel flipping awesome!

If you were all here I’d give you a big hug to mark the occasion. Make sure you’re in my proximity soon and you can claim this non expiring voucher for tactile celebrations!!!