I can’t see them – but it seems they follow me all the time – and only those with the right mindset and equipment can track their movements. Unbeknown to me ‘Duskulls’ have been occasionally lingering in my shadow and watching me while I thoughtfully munch on apples.

They were following me in the Cotswolds just the other day…

Thankfully I have a protector – and in an effort to catch all of the assorted creatures (there are also other far more outlandish ones!) that apparently congregate and float about my person she has recently invested in technology that hoovers them up in large quantities.

If you see her in out in the wild she usually has this weaponry to hand. 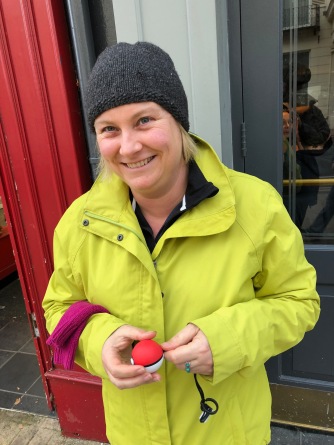 It’s called a Pokeball (who knew?!) and it’s now guarding our persons 24×7. Occasionally it vibrates on the coffee table or in her pocket to alert us that it’s automatically hoovered up a new captive. This buzzing also functions as a reminder that once caught they need to be properly cared for – because if such things aren’t exercised then they may stage a mass escape.

Consequently we must go out and regularly socialise them with others in the wild. This is rather useful when it comes to my willingness to go exploring, and so far the half term break has been characterised by plenty of park wandering with a little spherical cage.

Almost exactly two years ago (where does time go?!) I passed by Batsford Arboretum with a friend of mine (link) and we both thought that it looked lovely from a distance.

At the time we did say we’d go back but for some reason never got around to it.

That particular day of exploration was characterised by our usual tendency to get slightly lost (as well as discover deep mud) and although we meandered very close to the outskirts of this lovely little area of managed woodland we never actually ventured inside. 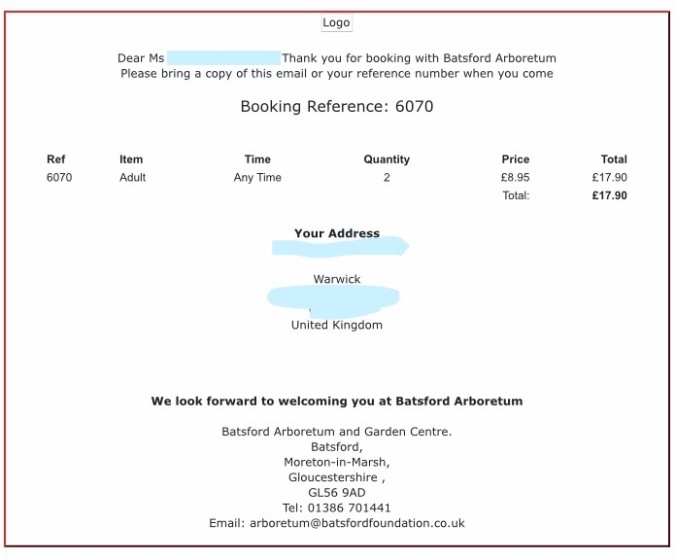 I’ve meant to go back ever since, so on Tuesday we booked some tickets online and set off to explore.

It’s dependant upon your perspective as to whether this kind of outing represents good value for money (as well as the petrol it cost us almost £18 – which is actually cheaper than two cinema tickets) because it’s entirely reliant upon the time of year that you visit, the willingness of nature to yield a riot of colour when you do, and whomever beholds all this leafy goodness possessing an underlying interest in nature.

If you like staring at a myriad of little buds, sprouts, flowers and mushrooms (that are everywhere) then I suggest Batsford Arboretum is worth your coin.

It is however worth noting that if you fancy visiting somewhere like this for a lengthy brisk walk then you’ll probably end up feeling disappointed – because to travel around the entirety of this little wooded park won’t take a very long time.

Even completing several circuits won’t add up to a massive distance – so if you’re a slow mover or not especially fit then this could be viewed as a bonus. There are some hills though – so just bear that in mind (you can rent a mobility scooter at the pay desk if you’re so inclined).

It’s all good though – because instead my usual ‘distance = virtue’ approach to walking on Tuesday was switched off and I was definitely in more of an exploration mode. This was fortuitous because Batsford Arboretum requires that you take the time to wander and explore – searching for all of the teeny tiny details – then there are some absolutely lovely things to see.

All in all we spent four hours there and every time we stopped there was something like this hiding in plain sight.

If I’m honest (once new Pokemon had been captured and long term inmates exercised) we spent a lot of our time taking shameless selfies with the autumnal canopy as a backdrop.

The faux bokeh depth of field effect on modern smartphones with multiple focal depth lenses makes an area like this a real joy to play with – and I have to say these are some of the nicest photos I’ve taken of my partner, and that I think she’s taken of me.

Of course – the arboretum itself is almost as lovely as my other half (who looked delightfully autumnal too) and both of us spent the majority of our time stopping, zooming, cropping, re-framing and generally fiddling with our nature photographs. 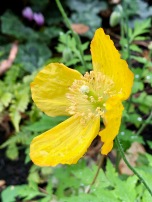 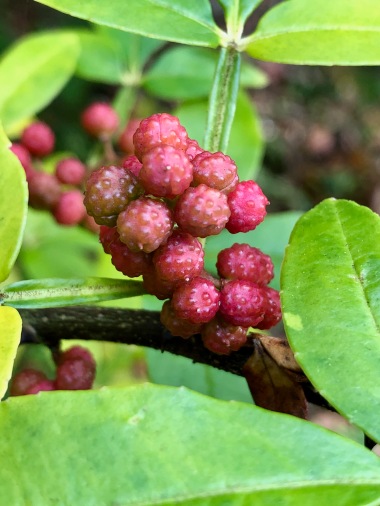 There’s also quite a lot in the arboretum that has a very oriental theme, and alongside the plantings (many of which come from Japan or the surrounding region) there are little architectural features all over the grounds that underpin the style of (then far away and exotic) landscapes that the architect was attempting to portray to those walking around the woods.

As well a lovely Japanese house (which I sadly failed to take any pictures of) there are also lots of cute bridges above streams and some really really wonderful sculptures.

There’s a lot of more traditional Cotswold architecture to be seen as well – and on top of the delightful thatched sandstone houses and grand county mansion there is a wonderful little church (St Mary’s) that’s clearly loved by the local community because it’s in fantastic condition. 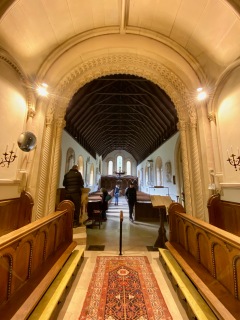 You’d think that this kind of high brow day out would inspire lofty and reflective thoughts in those who immersed themselves in the surroundings of the sympathetically planted surroundings.

Most would imagine that the calm tranquility would have a similarly calming impact upon it’s visitors.

We however are not your average visitors….

It’s true to say that although we both love nature we seem to love having a good time even more – and when we’re together a slightly… mischievous side emerges in both of us.

This can lead me to be quite naughty at times (as mentioned a few posts ago staying on plan with Slimming World has been a recent area where I’ve struggled) – but thankfully we can also inspire more virtuous behaviours in each other – and despite some treats such as a Sunday lunch with all the trimmings, a birthday party cake at the weekend (I only had a little sliver) and a couple of ‘skinny chicken burgers’ (basically two chicken breasts in a bun with some salad) at Wetherspoons we’ve collectively been doing rather well of late. 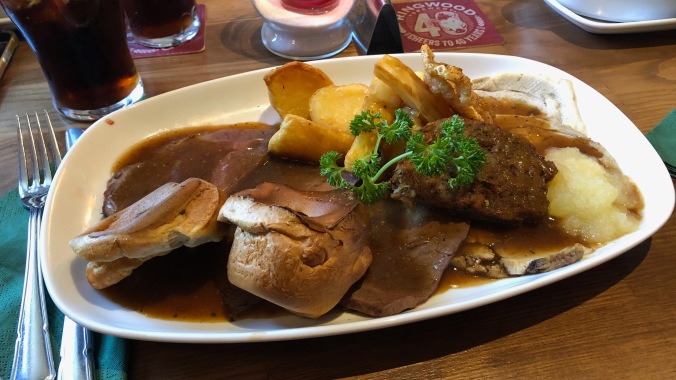 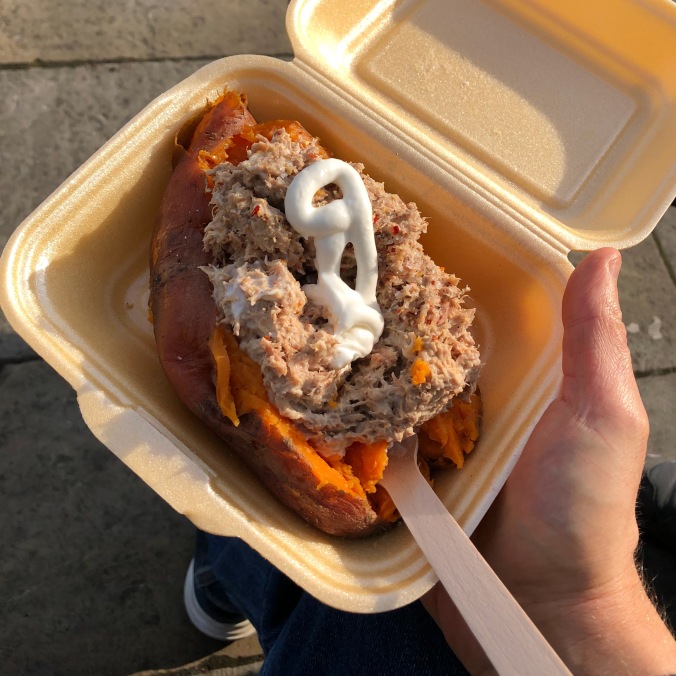 I am stepping on the scales at group this coming Saturday, and whilst I am definitely going to have a relatively sizeable gain compared to my last weigh in eight weeks ago there is a positive takeaway, because on my own scales I have lost a significant number of pounds in the last two weeks.

This is something of a relief, because in just over one frikkin week’s time I am going to the Slimming World ball.

This morning (after some gentle persuasion from my partner in crime) I tried on my tuxedo, and it fitted. Well – maybe ‘fitted’ is something of a stretch. What I mean is that the buttons did up, but overall it was still a little snug.

However, in many respects this is immaterial, because although I thought I had my outfit all planned and laid out today the world threw me a curve ball, and I found the most wonderfullest thing ever in the whole history of ever with a cherry on top and took it home in a carrier bag.

My initial plan was ‘try to look half decent’.

It’s now (thanks to the contents of my carrier bag) changed to ‘I plan to look freaking awesome!!!‘

This goes double for my partner, who has also found a really cool outfit that fits her like a glove. I’d go so far as to say I melted a little bit when she tried it on – and every subsequent time since I’ve become more and more convinced that it’s absolutely perfect.

It’s been really cool to be looking for little things and trinkets together, and nattering regularly about what will go with what, which shirt will look best with which waistcoat, and which necklace, earrings or clasps will work to accentuate neck and backlines.

It’s (in many respects) a world away from this time last year, when I was planning outfits on my own and scouring charity shops buying more than I needed to make sure that I had what I wanted.

This time I’m going to be over target on the scales – but even though I’m a bit heavier I’m also going to be infinitely happier.

This may well be my last public appearance for Slimming World and I’m damned well going to make the most of it – I want to go out feeling good about myself and what I’ve accomplished and numbers on scales are only half the story.

Today I’ve spent a wonderful half term day off that started with me loudly waking the house up at 6.30 (dancing at the end of the bed in my pants to eye of the tiger was just what my other half needed to laugh herself out from under the duvet), swimming 1.5km, driving to Coventry, walking through Memorial park, into town, round town and back again, coming home, cooking tea, and now writing a blog.

I had no-one to share my life with and I was busy drinking and eating myself into oblivion. Now, where there was despair and hopelessness there’s love and companionship underpinned with fitness and vitality. 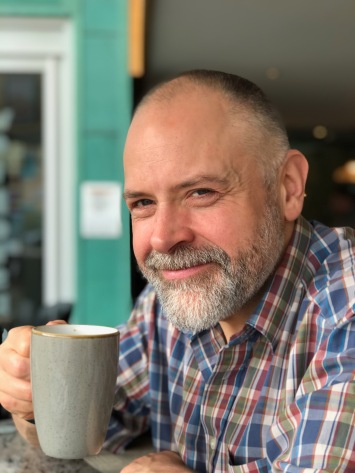 I’m going to the ball with my head held high. I have nothing to prove because I have a life and a purpose.

That’s why – sober as a judge (nearly four years now!) I’ll be smiling my ass off and swaying back and forth with my significant other to the last song of the night on the dancefloor without a care in the world.

I may struggle to realise it sometimes but honestly life is good.