I decided recently that I’d up the frequency of my posting again.

The truth is that I rarely run out of things that I want to explore in my mind – and writing my feelings down definitely results in a ‘release of pressure’ whenever I do it.

My blog means a lot to me partly because of this – but I also want it to be as authentic as humanly possible.

The biggest compliment I think I’ve been given regarding my blog (when I meet people for the first time in person) is that I sound the same in real life as I do on the page – and for me this equals success.

It means I’m being real and honest in everything that I write and for someone to ‘recognise me’ when I talk to them (after reading what I’ve written) is the highest form of flattery.

However in real life (just as with my blog) there are things that I often leave out of conversations.

I don’t want to appear miserable.

Self perception is a funny thing – and a long time ago I realised that although I considered myself a pragmatic realist others saw this as pessimism.

The flip side of this perspective is that these pessimists (realists?) can also consider optimists as deluded fantasists.

If you don’t allow yourself to feel bad you can’t begin the process of dealing with whatever is getting you down.

I’m always hyper aware though that (in my view) I’m very much a down to earth realist and that my realism can often take the form of ‘expect the worst but hope for the best’.

To me it means not being wasteful with my resources or just expecting everything to go right – but I’m aware that it can also make me look more dour than Andy Murray talking about why he was beaten in a Wimbledon final.

I don’t like others to see my inner Murray and so (like most people I guess) I often self censor, so that my lows are mitigated in the eyes of those around me and I don’t get a reputation for being a miserable git.

This often means less blogs getting published – paradoxically at precisely the time I need to write more.

My recent spate of silence over the last few months has resulted from two things.

Firstly my personal life is very happy indeed – but it’s also quite private.

Secondly my work life is not so great.

The other issue is that the first point affects the second in a way that I really never expected it to before I was in a relationship. When I was single it was no-one’s business but my own if I couldn’t find my way in life and occasionally felt down about it.

If I couldn’t navigate through a down period then it only affected me and after a while it invariably sorted itself out.

Now (as well as being hyper critical of myself for my current inability to get the job I want) I have to navigate the guilt of how any moods I may experience in relation to this may affect someone else.

I want to be a productive and vital half of a couple, rather than someone that’s struggling and dragging someone else down.

Before anyone highlights what a muppet I am – and that this is all in my head, let me assure you that I’m not only aware of this but I’ve been told on many occasions by my significant other that I’m just fine the way I am and that I have to let other people support me in the same way that I do for them.

I’m loved and I’m no island – and I need to continually remember these things.

It’s tough though – especially when you get ignored by agencies and employers (I feel as if I may as well post my applications into a furnace at times) or get turned down again after a another lengthy interview for a job that you know that you could do standing on your head.

‘Thanks – but no thanks’ is becoming a familiar refrain and this week it’s been in my face continually.

It’s also now been joined by ‘over qualified‘ (just to add insult to injury).

This continuing state of affairs has really dented my mood – and I went from standing on the scales yesterday morning and seeing a 2lb loss (compared to last week) to eating like there was no bottom to my stomach throughout the whole of Friday and this morning posting a 1/2lb gain.

I could look at this one of two ways.

I could say that I’ve failed and hammer more mental nails in the coffin of my already potentially downbeat mood or I could look at it as two weeks where I’ve lost a combined total of 9lbs.

I’m trying really hard to maintain the latter perspective – but it’s not easy.

Normally I don’t suffer from nightmares – but the night of my second employer refusal of the week left me with a doozy and I’m still struggling to shake the feelings it dragged to the surface.

It was definitely allegorical – but I really didn’t have to peel much away in terms of subtext to find the true meaning behind it.

My ex-girlfriend from many years ago was front and centre – and wanted to finally gave me closure about something that had been bothering me for a long time.

The dreamed revelation she delivered (although almost certainly fictional) was a kick in the teeth.

It turned out that she’d lied to me about moving on, finding someone else and getting married shortly after we broke up.

Instead she’d said this because she didn’t want me in her life.

In her eyes I was a failure and consequently there was good reason to lie and make sure that I had no more to do with her. In her mind the best way to do this was invent a fictional marriage – so told me she that she was in love with someone else and moved on.

I was a liability to be cast aside.

This has always been something that’s loomed large in my head. I couldn’t be the man I am now back then and the guilt drove me into the ground for years.

In the dream I also noticed that her skin tone was changing – along with other physical attributes.

I realised with horror that she was beginning to look just like my current partner – and as the nightmare continued it became more about what I could lose in the present rather than what I’d already lost in the past.

I awoke breathless and sweating at 4am in the dark and cold of a frosty morning.

I was both distraught and muted. I didn’t feel able to answer when an arm reached around me and asked if I was ok – I just held on tightly and told myself over and over that none of it was real.

It upset me though – and left me with a huge sense of dread and loss all day long.

I proceeded to eat both of my conscious and unconscious feelings – and started with popcorn for breakfast.

You know that the day isn’t going well when you’ve nailed 2000kcal of popcorn before lunchtime. Several tonnes of salad, cottage cheese, ham and fruit later and I still felt no better.

The truth is that this week hasn’t really resembled last week in terms of eating. Toward the close of it I’ve definitely been relying on my exercise to keep things under control.

On Thursday (whilst driving home after meeting a lovely friend in Oxfordshire) I received a call.

On it I was turned down by an employer for the first of two times this week – and upon reaching my front door found myself both angry and willing to harm myself with food.

Rather than eat myself silly I elected instead to go for a ‘rage walk’ – which turned out to be a six mile route march in the rain around the streets of Warwick and Leamington Spa.

It’s rare that I get out of breath or perspire while walking – but when I got back later that evening I was soaked from both the rain and my sweat.

On the plus side these days I’m capable of walking 15 minute miles continually for at least 6 miles.

On the negative side I felt like I had to because I knew what was coming later that evening – and I also knew that the chances of stopping it were practically zero.

I was planning to fill my face and I did.

So – that’s how I feel currently.

Hopefully I don’t come across as too miserable – and you’re not all thinking that you should untick the ‘subscribe’ button on WordPress or block me on Facebook.

If there is hope and happiness to be found inside my head today it’s contained within the knowledge that tomorrow is a special day – and despite how I may feel about my (lack of) employment there are far more important things in my life to focus on. 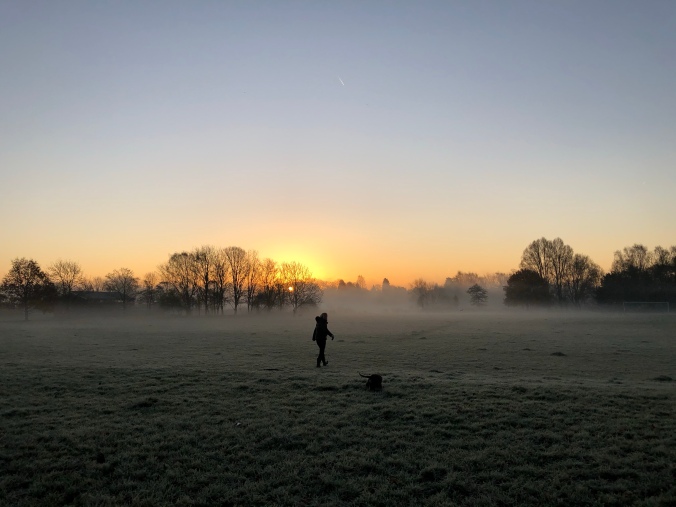 I’m still getting up every day and trying.

I’m still loving life and loving my ability to physically move through the world every singe day.

I’m still in a good place – and a couple of crappy days does not equal a life of failure or days that others will follow it.

Tomorrow is as yet unwritten and I aim to try bending it to my will, and making it a good one. In the meantime I’ll just keep on keeping on.