I felt almost guilty for being on the street today as I walked to work – but as a ‘key worker’ (a phrase that still somehow doesn’t sound real) I am still walking back and forth to my place of employment with the government’s blessing. I’m keeping a distance of two metres from people on the way – and standing as far apart as I can in my office when I’m there. 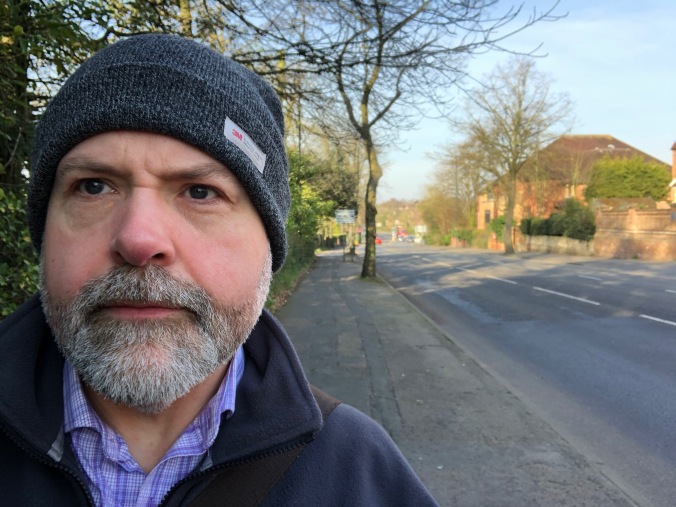 For the most part I felt like rather a lonely figure at 8.30 this morning. Although there were some cars about the roads that I walk down (which are normally filled with often stationary traffic) today they were largely empty.

It’s amazing what a difference a day makes – because yesterday afternoon I was shaking my head in disbelief as I watched the great British public temporarily give up on hunting for toilet roll.

Other people don’t seem to view the term ‘essential travel only’ in quite the same way that I do – and whilst I walked home from the hospital yesterday I was staggered to see how the customers of McDonalds were handling the news that their favourite restaurant would be closing.

It’s difficult to understand how people’s minds work at the moment – and whilst these people weren’t leaving their cars I couldn’t help but think that they are almost certainly the same people who packed out pubs and chip shops last Friday on the last night they were allowed to open.

As a friend said to me today – I wouldn’t be surprised if there there’s a huge spike in confirmed cases in two weeks. This newly infected group will almost certainly have another completely incurable condition in common that will probably mean they suffer complications for the rest of their lives.

After all there’s still no cure for being an idiot and I doubt one will ever be found in my lifetime. One can only hope the strain on the NHS they cause is worth the pints and burgers they consumed or the beaches they packed out at the weekend.

Personally I doubt it will be.

It’s really not worth the stupidity – because the strain and worry that’s being caused in those being called upon to look after us in our hours, days, weeks and months of need is all too evident.

They’re without a doubt some of the best people I’ve ever worked with in terms of how much they care for each other and the patients that they look after – but today (not for the first time) I faced first hand just how much pressure these very human people are under.

I spent much of the first half of my day on the phone dealing with staff struggling to get to grips with the IT burdens that ‘working from home’ presents.

They’re almost all a workforce that are used to being in front of patients and speaking face to face. They’re often based solely at an office, a GP surgery or a hospital and technology is something that is usually incidental to their work – or in the worst cases a hurdle to overcome.

Often they defer problems to ‘someone techie in the office’ – but all of a sudden that person is no longer around.

It’s not surprising to hear again and again that people didn’t move into looking after other people for a living because they loved using a laptop. All of a sudden without one (and other mobile devices) they can’t do their jobs – and on top of everything else they have to deal with there’s a sudden and steep learning curve.

To compound this – since some are in high risk groups themselves they’re dealing with these problems on top of the unsettling loneliness self isolation.

To me IT challenges are just logical or logistical problems that can be solved with patience and persistence – but to others (who don’t view these as the interesting puzzles that I do) it can easily be the last straw.

They are trying against all odds to direct all of their efforts toward patient care whilst simultaneously being uprooted from where they normally work or even what they normally do.

They’re trying to do their jobs from their kitchens or empty offices whilst surrounded by children or sitting without the comforting voices of friends and colleagues.

One user in particular was in tears with the frustrations of it all – and although together we resolved their issue (and ultimately shared some laughs) I wish I could have waved a magic wand and made all of their worries disappear.

All I can do is help where I can – and I’m glad (after a lot of worry and moral soul searching in my last blog) that I decided to stay and help the people who really need it. What I’m doing isn’t a lot in the great scheme of things – but it helps and I’ve begun to think once again that things happen for a reason.

I love helping people and furthermore I take a pride in it.

Also my partner agrees that I’m right where I should be, despite how much worry have about how this choice might affect us both in the long term.

I’m doing my level best to stay safe though.

I’m washing my hands all the time, using tissues on all door handles, steering well clear of close proximity to people – and wearing gloves when needed as well as anti bacterial wipes.

For someone with eczema however all of this diligence isn’t easy. My skin doesn’t do well confronted with lots of detergent – and at the moment Body Shop Hemp hand cream is my bestest friend in the whole wide world…

So – for the time being I’m walking through a largely deserted world, feeling more than a little itchy to do what little bit I can.

I’m still eating biscuits though. Stress is still there and coping with it is still hard – but I’m trying, and I guess thats all anyone can do.

P.S. I wish NOW TV would stop sending me suggestions for things to watch during these troubled times…

This I could do without….